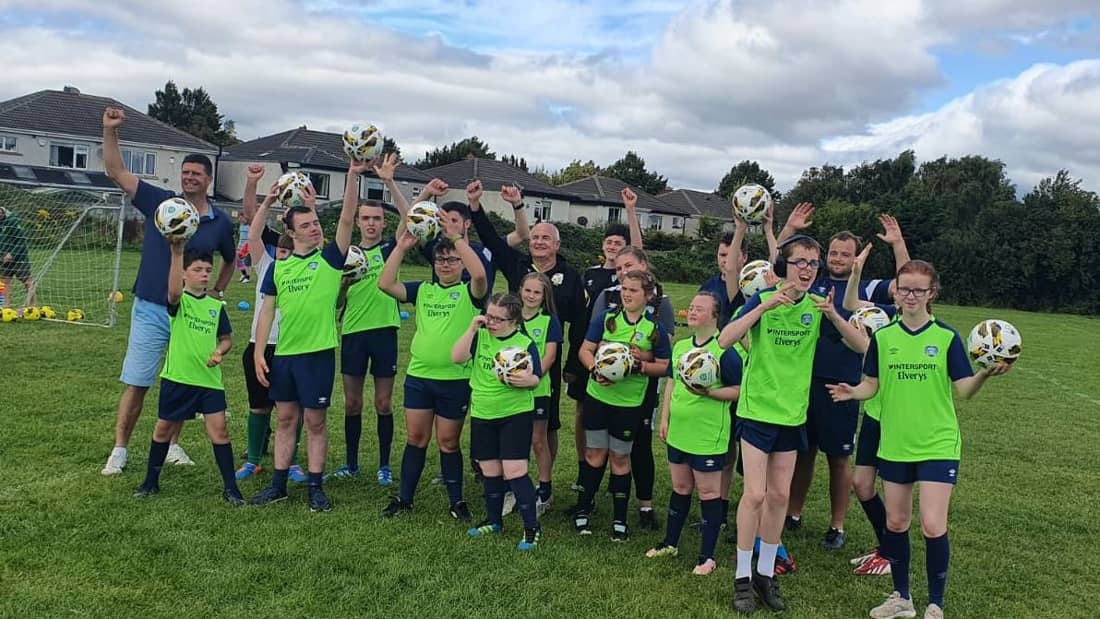 KNOCKLYON United, in partnership with the FAI, staged a ‘Football for All’ Summer Camp in Ballycullen Park last week.

Run over three days, the camp/training was organised by Chris McElliott and Gerry Riordan from the FAI, together with a number of coaches from Knocklyon and involved up to 17 players.

“It was a great success and the added bonus was the attendance of Niall Quinn who arrived on the last day” said Mick Kennedy, founder of the Knocklyon United FFA team.

“Niall spent over an hour speaking and playing football with the players. He also presented a football to each player where he signed every ball.

“It was such a success that these FFA Summer Camps will be a regular event, spread in different venues throughout Dublin” he added.

Indeed Football for All in Dublin is really starting to take off as Kennedy explained “I approached the FAI and DDSL and have agreed to set up a FFA League to be run by myself and the DDSL.

“I wrote to all the DDSL clubs to advise them of my plans and there are now up to 20 clubs interested in setting up a FFA Team within their club.

“However, for those clubs who are available, friendlies will begin in mid September.

“The second type of division will include teams of five FFA players and five mainstream players and these will be Under 12 or brothers/sisters.

“In this way all FFA players will be able to participate in the League and will be part of the club.

“With regards to the Mixed Mini World Cup Tournaments, there are six planned for next year.

“Three of the tournaments will be held in Abbotstown; Knocklyon United and Lourdes Celtic with the  other three taking place in Portlaoise, Galway and Cork with dates to be confirmed.

“We are keen to attract as many ‘Football for All’ players that we can allocate to local clubs and ensure there are more FFA teams playing soccer.

NEWER POST“We must be relentless, keep working hard and be ruthless at all times”
OLDER POSTO’Gorman pleased with start to Peamount’s title defence