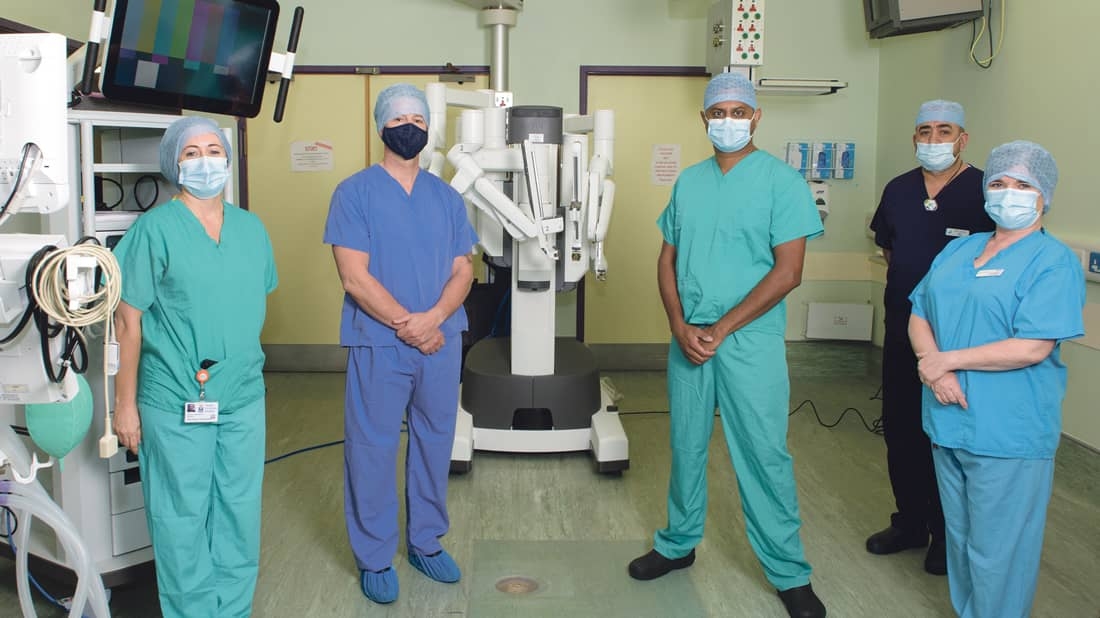 The robotic surgery was completed thanks to a €2m investment by the Tallaght University Hospital Foundation (TUHF) – and the local hospital’s newest recruit, Leona the robot.

Christened Leona by staff, the robot, according to Tallaght University Hospital (TUH), allows surgeons to operate at high levels of precision without ever touching their patients.

According to Prof Paul Ridgway, Consultant Surgeon and Perioperative Clinical Director at TUH: “Completing the first robotic assisted surgeries at TUH this week is a significant milestone in our continuous efforts to push the boundaries of the provision of healthcare to our patients.

“We are fortunate at TUH to have several robotically trained surgeons and nurses on staff so we were able to get Leona working almost immediately on her arrival.

“Leona’s arrival is a major step forward in driving innovation at TUH and providing our patients with cutting edge technology to ensure the best outcomes from their surgery.”

According to TUH, the surgeon sits at a console next to the patient, with Leona providing the surgeon operating with an advanced set of instruments to use.

Leona translates the surgeons hand movements in real time, bending and rotating the instruments while performing the surgery, with the tiny wristed instruments moving like a human hand but with a greater range of motion.

The size of the instruments used makes it possible for surgeons to operate through one of a few small incisions.

According to TUH, Leona will be used primarily by the busy Urology service at TUH, with Colerectal surgery and Gynaecology also using the new robotic system in time.

Douglas Collins, Chief Executive of Tallaght University Hospital Foundation (TUHF) has thanked their generous donors and the support of its partners in Bartra Capital Group and Philip Lee, for enabling the foundation to deliver the innovative robotic programme in line with leading hospitals internationally.

“Thanks to the generosity of donors, TUH are now able to offer an alternative option to open surgery and perform complex minimally invasive surgical procedures with precision and accuracy to over 200 patients annually, making a significant difference on how TUH will deliver excellent patient care”, Mr Collins said.

“We are thrilled to be in a position to invest €2m in this state-of-the-art medical technology that assures better patient outcomes and enhanced efficiency.

“A massive thank you to all our donors and supporters that continue to back our vision to radically improve the quality of care through healthcare investment.”