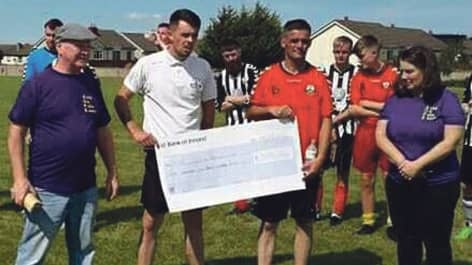 A COMMUNITY-led charity football match raised €3,700 for a locally based suicide prevention centre, supporting them in supporting others during the pandemic.

Last weekend, the Tymon Celtic Past Members gathered in Tymon North to take part in a sponsored charity match in aid of the Hope Suicide Prevention Drop-In Centre in Tallaght Village.

Ray Conlon and Margaret Doyle from HOPE receiving a cheque for €3,700 from the charity match organisers

HOPE [Hold On Pain Eases] was established in June 2013 by Tallaght mother Mary McLoughlin, who told The Echo that the service is for anyone feeling lonely, isolated, depressed or suicidal, alongside those in the community affected by or bereaved by suicide.

The service, which is a registered charity and receives no Government funding, provided phone support and counselling over recent months.

The centre in Tallaght village that has recently re-opened however, is not operating as a drop-in centre, with those who would like to chat with someone in person asked to call to make an appointment.

Alongside providing a listening/support service for people with mental health issues, HOPE also provides a counselling service – with clients asked to leave a donation only.

Last weekend, the community raised €3,700 in aid of HOPE and the support it provides.

The charity football match was organised for June but was rescheduled due to Covid-19 measures.

Thanking everyone who took part, including organisers Keith Maloney and Paul Halpin, and all those who sponsored the footballers, Mary McLoughlin said that the money raised would be used to help pay the centre’s overheads.

HOPE also hopes to invest some of the money raised into community-based suicide-prevention training, when it is possible to do so.

“We’d like to say thanks to the community . . . the amount of money raised is fantastic,” Mary said.

“The community has always been so generous in supporting us, and we’ve had lots of support during lockdown.”

According to Mary, there has been a slight increase in calls in recent weeks, with anybody who would like to talk encouraged to get in touch.

“We have worked right through lockdown by phone,” Mary said.

“Anybody who needs us, we are here at the end of the phone.

“People can call or text or message us through our Facebook page.”

Mary added: “We are back open but not at our full capacity.

“We are not a drop-in centre at the moment, we have to operate by appointment only.

“Anybody who would like to come in for a chat can call us by phone and we’ll arrange an appointment.”

Mary stressed that the centre is following Government guidelines, with measures such as social distancing and sanitisers in place.

People can still support the charity match and HOPE by donating on GoFundMe (Charity Football Match in aid of Hope).