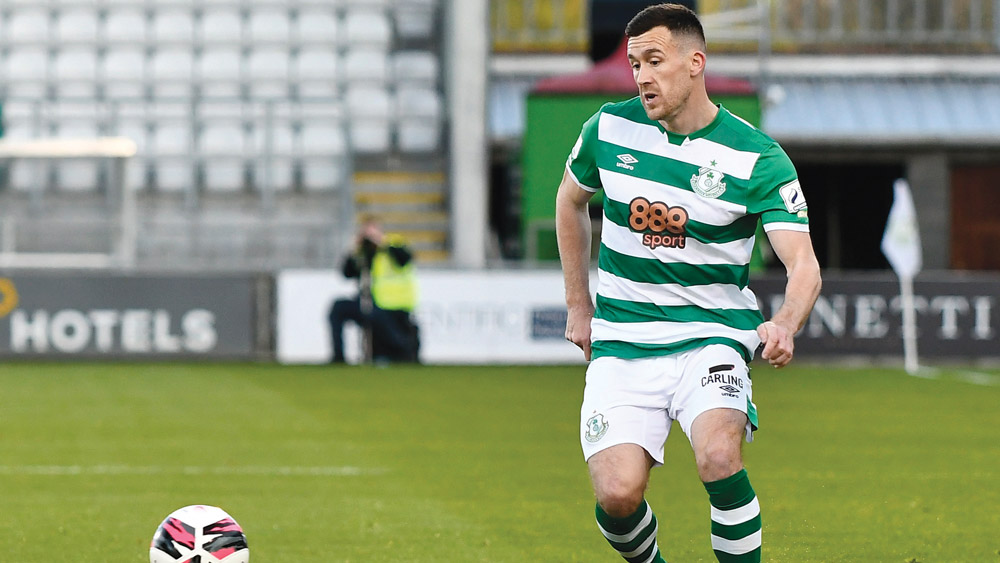 IT HAS been a long wait, but Kilnamanagh’s Aaron Greene finally has the opportunity to sample the group stages of European football when Shamrock Rovers play host to Djurgårdens in the UEFA Europa Conference League at Tallaght Stadium this evening (kick-off 8pm).

It was back in 2009 that Greene made his League of Ireland debut in the maroon and white of Galway United and he has been a ubiquitous presence on the domestic front ever since.

He has picked up a plethora of team honours in an eventful League of Ireland career to date – including two Premier Division titles and three FAI Cups – and is now ready to scratch another item off his bucket list.

“I’ve played in the league 13 years now and it’s always something that I’ve wanted to do” Greene told The Echo.

“I’ve got everything I’ve achieved domestically, but something on a European level, to play in a group stage on Thursday will be great.”

“It’s one that we’re not just looking forward to in terms of just going there to be a part of it. We want to go and hopefully do well in Europe and hopefully surprise a few people.”

Despite initial suggestions that UEFA requirements were going to force the Hoops to move their home games to the Aviva Stadium, Stephen Bradley’s charges have been given the go-ahead to host their Conference League Group F opponents Djurgårdens, Molde and Gent on their home patch in Tallaght.

Given that he grew up a stone’s throw away from the ground, Greene is delighted Rovers are able to remain in Tallaght throughout this campaign.

“I think when there was talk about it not being able to be held there, I think us, as players, definitely wanted it to be there. We’re very lucky that we’re able to play in Tallaght.

“We’ve been unbeaten in the European campaign there this season. If it goes to the Aviva, I don’t think it brings that same sense of pride as when you’re bringing it to where you play domestically.”

While Swedish outfit Djurgårdens may not necessarily be a household name, they are eight-time Allsvenskan champions and boast seven full internationals within their ranks – something that will not be taken lightly.

Indeed, from Greene’s perspective, the very fact the Stockholm men have reached this stage of the competition is reason enough to be wary of their challenge.

“There’s no bad teams in any European group stage, I’d like to think. They’re a very, very good side.

“They haven’t been in Europe in a couple of years, but we’ve done our homework on them. We’re coming out with a game plan,” Greene insisted.

“Under the manager we’re not allowed to go from thinking about other games to the next. We go one game at a time and we’ve done our analysis” he said.