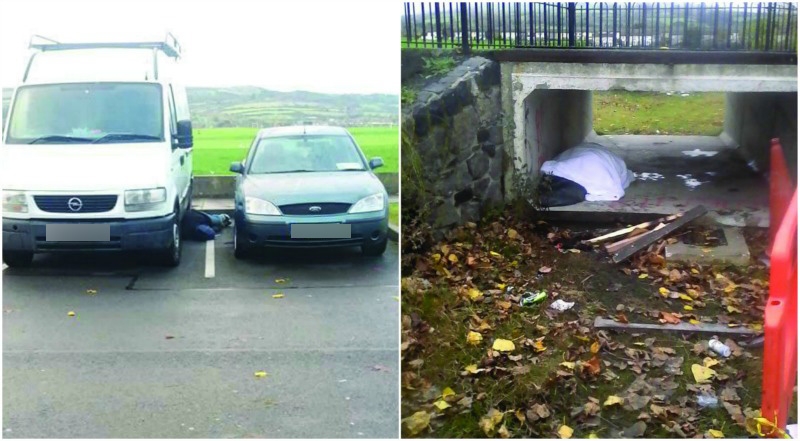 HOMELESSNESS: “I don’t care what we’re being told about a recovery, it’s not happening”

IMAGES of people sleeping rough in two Tallaght communities were captured this week, a chilling reminder that, as the cold weather approaches, not enough has been done to support our homeless – or those struggling to keep a roof over their heads.

So many people are accustomed to seeing rough sleepers in the city centre or in Tallaght locations such as the Priory – not in estates.

(Pic on left via Darren Casey)

However, Nicola Moore of Visit, a Tallaght-based, community-led soup kitchen, stressed that sadly these two men, who were sleeping rough under a small bridge in Killinarden and sheltered under a van in Fettercairn, is not a new occurrence across local communities.

“Since we started two years ago, people have been sleeping rough within communities and in places that many people would not expect,” Nicola said.

“We’re constantly getting reports of people sleeping rough right across the area, going up as far as Citywest and Saggart.

“It’s sadly nothing new but what’s even worse is that despite all of the promises, the discussions and coverage, nothing has changed – nothing has gotten better.”

Nicola confirmed that one of the men sleeping rough has linked in with Visit and is getting support, while the second has been approached by a volunteer and filled in on the services available.

She said: “It’s just devastating to see people alone, isolated and forgotten like this, and we want to let them know that we are here to help.

“The situation is just getting worse,and last week we were approached by a dad who came to the soup kitchen looking for food to feed his three kids.

“They have a roof over their heads, but are struggling to feed themselves, and there’s lots of families like them who are going hungry all year round.”

She added: “We’re feeding around 15 to 18 homeless people each night, alongside supporting families living in hotels who have no cooking facilities.

“Christmas is also around the corner and we have been inundated this year with desperate messages for food, and people are just looking for the basics.

“I don’t care what we’re being told about a recovery, it’s not happening.

“We’re out there at the cold face and nothing has improved.

“The Government is continuing to fiddle the figures when it comes to homelessness, hiding the problem rather than solve it.
“And, despite the Winter Initiative, there are still not enough beds.

“This week we’ve had a single woman, sleeping rough on her own for three nights because she couldn’t get a bed in a women’s hostel.”

New figures from South Dublin County Council this week showed a 60 per cent increase in the area’s homeless since the start of the year, with 439 people now officially homeless.

Sinn Féin Housing spokesperson Eoin Ó Broin TD, who described the increase as “shocking but not surprising”, said: “These figures do not include those who are sofa-surfing, over-holding on their private rental accommodation or turned away from the homeless desk in Tallaght.

“The real homeless figure for the county is considerably higher.

“Minister Coveney must increase funding to the council and support them in a more aggressive programme of house acquisition.

“Failure to do this alongside failure to address the causes of homelessness will result in further increases before the end of the year.”

Thanking the community for its continuous support, Nicola invited anybody who can assist Visit to get in touch, with the voluntary service currently looking for non-perishable food, butcher vouchers, Smyths toy vouchers, any toys if new and in packaging, warm clothes, including scarves, gloves and hats, sleeping bags or Christmas goodies like tins of biscuits or selection boxes.

Nicola also encouraged members of the community to report any people sleeping rough in their community to Visit and they’ll touch base.