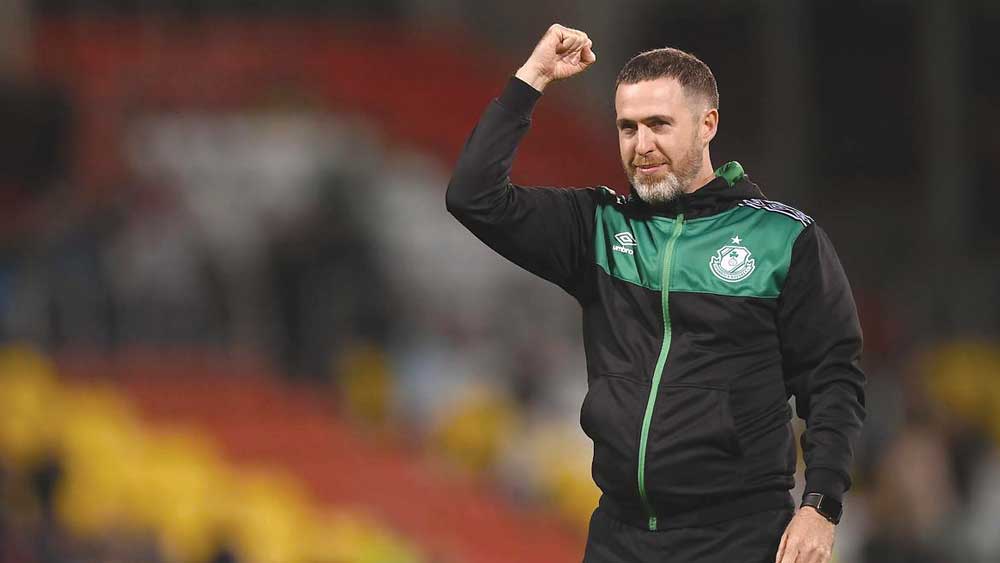 Shamrock Rovers boss, Stephen Bradley sees his side embark on a massive week in which they bid to secure a return to the Europa League group stages and also face Dundalk in a top-of-the-table clash in Tallaght

Huge week for the Hoops

SHAMROCK Rovers find themselves one round away from a return to the group stages of the Europa League, and whether or not they can complete that quest will be determined over the coming week.

Stephen Bradley’s men travel to Budapest to face off against the Hungarian champions, Ferencvaros this evening, hoping to deliver a performance that will at least keep them in the reckoning ahead of the return leg in Tallaght a week later.

While knowing they face the most successful club in Hungarian football, the Hoops have reason to be hopeful of defying the odds and taking another big scalp on the European stage.

Next Thursday’s return leg will mark 11 years to the day that the Tallaght side shocked Partizan Belgrade with a 3-2 aggregate victory in the Europa League qualifier that resulted in them becoming the first Irish club to reach the group phase of a major European competition.

They are now back on the brink of a similar feat and they have managed it despite missing the services of some of their top players, the likes of the injured Jack Byrne and Roberto Lopes.

A brilliant 5-2 aggregate triumph over Macedonian champions, FC Shkupi earlier this month set up this mouth-watering tie with Ferencvaros and suggests that the Tallaght side have the firepower necessary to deliver another famous victory.

Yet they will now be coming up against a side that has dominated Hungarian football, with 33 top-flight league titles to their name, including the last four on offer.

And they also have plenty of European pedigree to speak of, most notably an appearance in the final of the 1974/75 European Cup Winners Cup in which they lost to Dynamo Kyiv.

What’s more, they will be carrying Europa League group experience from last season into this tie, albeit having ended up propping up a pool that also included Bayer Leverkusen, Real Betis and Celtic.

Defeat over the two legs this coming week will see Rovers drop into the Conference League groups, which in itself will garner the club almost €3 million in prize money, but Bradley will have his sights set on the bigger prize.

Rovers’ domestic form in recent seasons is also a source of encouragement for those hoping they can defy the odds this week and secure further progress in European football’s second tier.

Winners of the last two Airtricity League Premier Division titles, the Hoops are in pole position for a third as they lead second-place Dundalk by four points with a match in hand.

And they also have the opportunity to strengthen their hold on top spot this coming Sunday when they welcome the Lilywhites to Tallaght Stadium.

While the challenge of Ferencvaros will preoccupy Bradley, the visit of their Louth opponents will be one he and his troops will not be taking lightly.

Dundalk a 1-0 win in Oriel Park in June after Rovers had won on a carbon copy scoreline in Tallaght back in April.