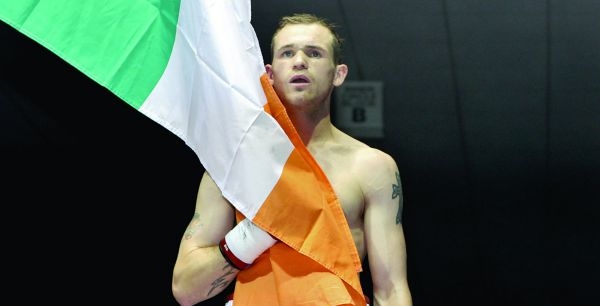 PATRICK Hyland notched up the 31st victory over his pro-boxing career with possibly his best knockout punch ever, but admitted it was an emotionally difficult challenge.

The 32-year-old super featherweight was fighting for the very first time without his father Paddy in his corner after he a had tragically passed away back in June.

Up against David Martinez in Lowell Memorial Auditorium in Massachusetts, Hyland brought an end to the contest with a big left hook in the eighth and closing round from which the Californian was unable to recover.

“Mentally it was very tough for me” the Tallaght man told The Echo. “Leading up to the fight everything was going great but after that first round the realisation that my Dad wasn’t there really hit me.

“I was so used to him being there, I even looked around for him at times.

“There were times when I just didn’t want to be there and a few rounds that I just wasn’t up to it.
“I had my hands down and I let him hit me a couple of times, but I didn’t feel it because emotionally I wasn’t there.

“It was a good fight and I caught him with the perfect left hook. It was probably the best knockout in my career” he added.

Sustaining a cut to the head after an inadvertent clash in the sixth round, Hyland did well to remained as focused as he possibly could.

He is hoping to be back in the ring early in the new year and will want to be earn-ing a title crack sometime in 2016.