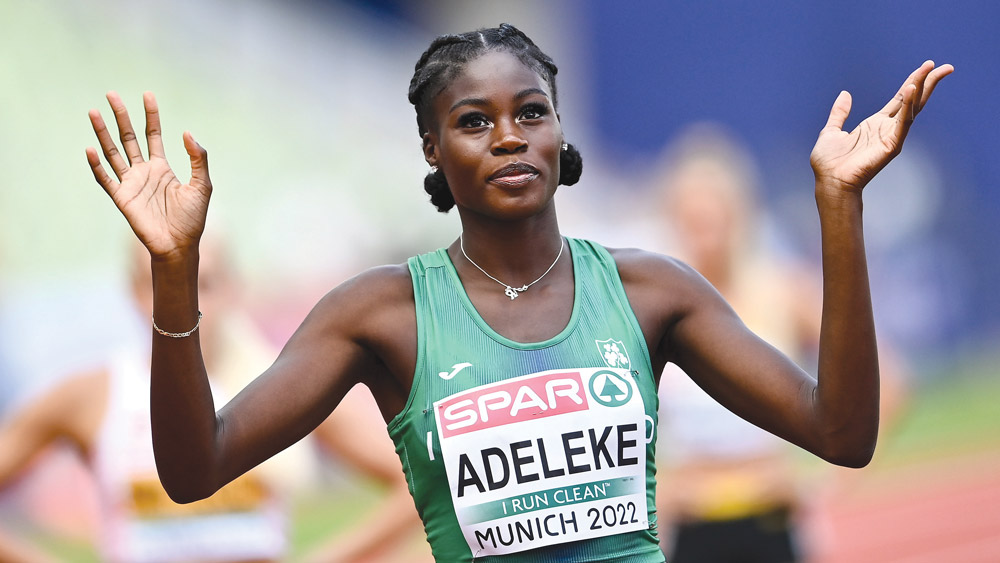 RHASIDAT Adeleke has every reason to feel confident ahead of 2023, following a season in which she has shattered four national records and helped set Irish sprinting alight on the Senior World and European stages.

The Tallaght Athletic Club star recorded a new national best of 50.53 on her way to a fifth-place finish in the European Championship 400m Final in Munich last week before playing a pivotal role in a sixth-place finish for the Ireland Women’s 4x400m Relay team on the same stage.

This tremendous feat followed hot on the heels of her superb display at the World Championships in Oregon from which she emerged ninth in the 400m, missing out on the final by a mere 0.16 of a second.

For the 19-year-old Adeleke, such performances have vindicated the decision to unleash her on the senior international stage this year and, having more than proven herself at this level, she is relishing the prospect of competing again for her country.

“I’m happy to have been able to make a name for myself in the senior ranks” Adeleke told The Echo.

“I now know, and others are also aware, that I’m able to be competitive against the best in the world and Europe.

“Every championship I’ve gone to, I’ve finished above my ranking. It gives me confidence knowing I can still perform under the pressure of not just underage championships, but senior championships too.

“Although I was competing against seniors this summer and not just my age group, I still applied the same pressure on myself as I would’ve previously.

“At the end of the day, I see all competitors as the same regardless of their age. I have the same goal.

“The only slight difference may be that, at underage championships, my only goal is to win, whereas this year, since I’m new to the senior ranks, I’d be pleased with a medal.

“I’m still young and I need to be patient with the process. I’m happy with everything I’ve achieved this year and I’m looking forward for more success in 2023 by God’s grace” she said.

Certainly, huge excitement has been generated in Irish sprint athletics as a result of Adeleke’s exploits, and those of Israel Olatunde, who finished sixth with a new national record of 10.17 in what was a first-ever appearance by an Irish man in a European Championship 100m Final.

And the Texas University-based athlete is strongly tipped to send more records tumbling in 2023.