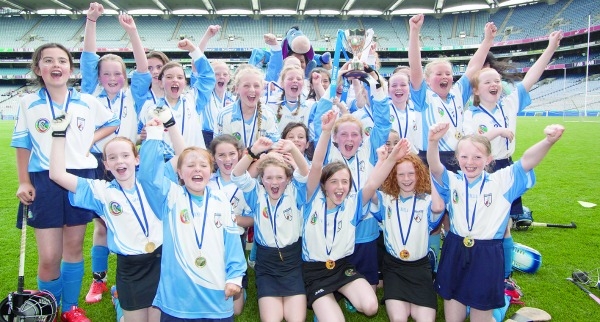 GAELSCOIL Inse Chór had to battle ferociously to eventually see off a gritty Scoil Columba side 3-3 to 1-4 when they met in the Corn Na Mumhan final on Monday in Croke Park.

The Glasnevin outfit seemed to have a response to every score Inchicore chalked up, that was until the closing five minutes of the first half when a point from Aideen O Snodaigh and a goal by third-class pupil Ruby Whittaker pushed them four points out in front.

It was to prove a crucial cushion in the face of a strong second half surge by Columba that appeared to really threaten their opponents’ grip on proceedings until O Snodaigh broke from midfield and planted home a third and final goal with three minutes left on the clock.

It was O Snodaigh who opened the scoring in this tie with a point before Columba responded in kind.

Whittaker then registered the first of her two goals with a fine ground strike that sent the ball high into the net only to see their northside opponents do likewise.

Both sides then swapped points before Inse Chór opened up a little breathing room late in the first half.

Olivia Ní Ruanaigh, Georgia Nic Chormaic and goalkeeper Abby Nic Cholmáin all played a big part in staving off the Columba attack in the second half which brought them to within two points.