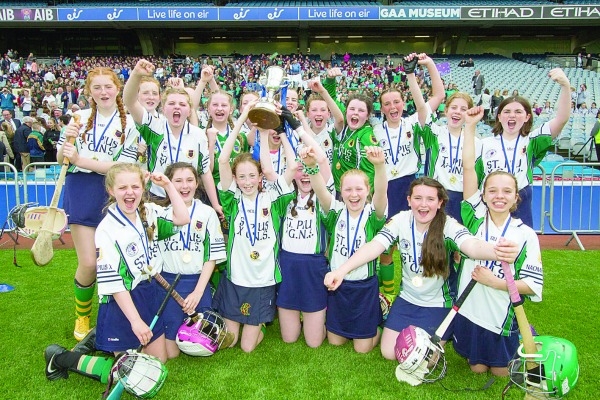 FOR the second year in succession Scoil Pius X GNS raised the Sciath Bean Uí Phuirseil, seeing off the very team they beat in last season’s decider Scoil Áine of Raheny 4-3 to 2-2 on Tuesday in Croke Park.

The Terenure school was certainly made work for the title as their northside rivals raced a goal ahead by the halftime break.

But a totally uncom-promising defensive display in the second half saw Pius keep their opponents scoreless throughout this period which laid the foundation for the win.

Taylor Edwards found the back of the net for the Terenure side in the opening half with Aoife Campbell tagging on two points.

Still they found themselves trailing 2-2 to 1-2 at the recess, but it was not long before they began to take control.

While goalkeeper Maeve Romayne pulled off some excellent saves and laid the platform for some telling attacks with very precise puck outs, Sophie Noble at centre back along with Emma Kennedy and Alanna McEvoy, cut out much of Scoil Áine’s offensive play.

At the other end of the pitch Orla Ryan registered two goals to rocket Pius in front while Campbell also found the back of the net from a free before sending over two points, one of which came from a sideline cut.

It was enough to put them out of sight as the minutes ticked away and they made it back-to-back Cumann na mBunscol honours.