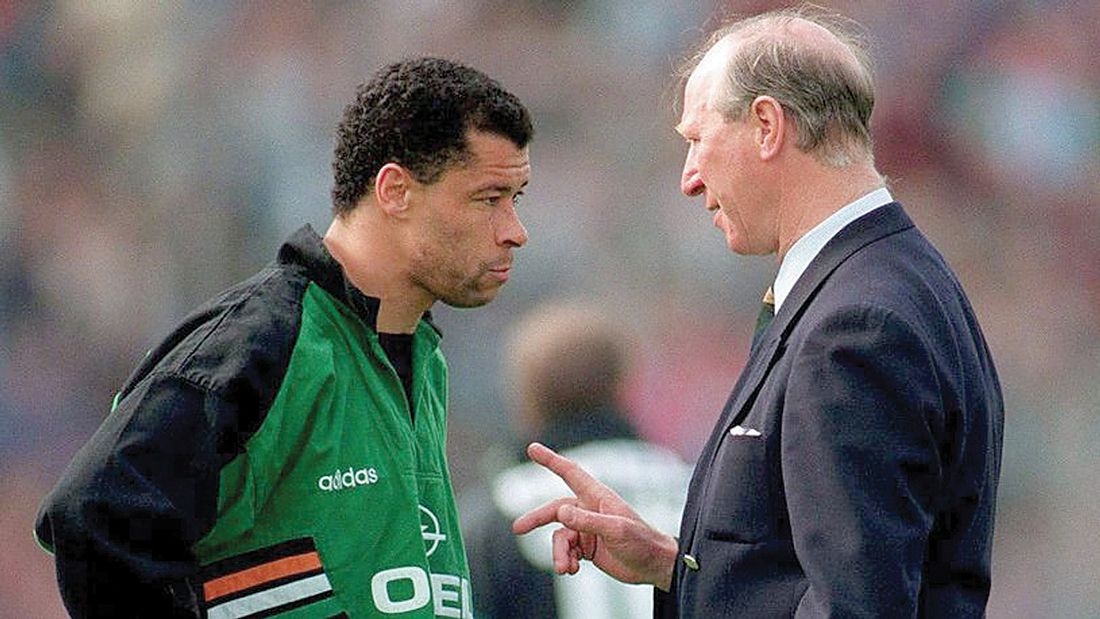 ‘Irish people warmed to him because of his big character’

STEPHEN Kenny and Paul McGrath have spoken about the impact that Jack Charlton had on the nation following the passing of the legendary Republic of Ireland manager.

1966 World Cup medal winner, Charlton who had taken charge of Ireland back in 1986, led them to qualification for Euro ’88 as well as successive World Cups in Italia ’90 and USA ’94 in what is widely regarded as the ‘Golden Age’ of Irish international soccer.

Jack Charlton passing on advice to Paul McGrath during an international

Following the passing of Charlton last week at the age of 85, sports alumni spoke about his influence on the game including Republic of Ireland manager Stephen Kenny.

“It was very sad to hear the news of Jack’s passing,” Tallaght’s Kenny told FAI.ie.

“To qualify for three major tournaments, two World Cups and a European Championship, was an exceptional achievement.

“Those tournaments also showed us how a successful Irish football team can lift and inspire the nation.

Former St Patrick’s Athletic, Manchester United and Aston Villa defender Paul McGrath grew to become one of the greatest players to don an Ireland jersey largely because of the backing of Charlton.

Indeed Charlton’s boys made it to the knockout stages of both World Cups, reaching the quarter finals in Italy where they were edged out 1-0 by the tournament hosts.

McGrath, who was a mainstay in the Ireland team at the time, spoke about his pain at hearing of Charlton’s death, saying “I am truly heartbroken at Jack’s passing.

“It is difficult for me to articulate what Jack meant to me both on and off the football field.

“Throughout his ten years as manager of our International team, Jack backed me as a footballer and as a person – he became a father figure to me.

“He gave me his full support when I needed it most and for which I am forever grateful. He has been a hugely important person in my life.

“The Irish people warmed to him because of his big character and he gave us the belief in ourselves to compete in the big tournaments. I am very honoured to have been a part of Jack’s journey.

“Today is a sad day for the Irish football community and we all owe him a huge gratitude for the joy and memories he has given us.

“He is a man I genuinely loved.

“My thoughts today are with Pat and the Charlton family.”

A book of condolences has been opened to allow people to express their sympathies to the family of Jack Charlton, which can be found at: www.fai.ie/jack-charlton-rip

NEWER POSTGardai seize drugs valued at €2.5 million
OLDER POSTIt’s all to play for in the Dublin Ladies Football Championship