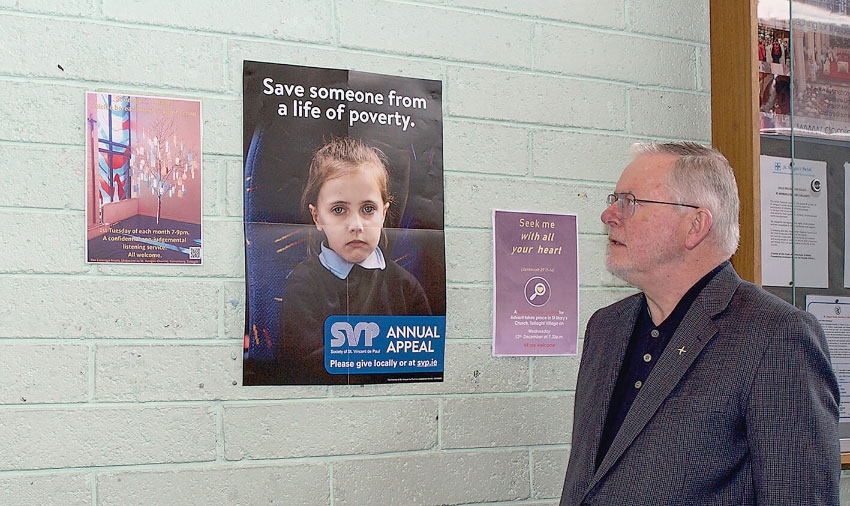 ‘It’s somebody robbing the Christmas of families in distress’

THE generosity and goodwill of one Tallaght parish was stolen this week, when a lone raider armed with a knife snatched €5,000 raised by parishioners for St Vincent De Paul and the many families in need that the charity will support this Christmas.

The theft, which occurred on Wednesday, December 12, has left the parish of St Aengus in Balrothery heartbroken, with parish priest Fr Ben Moran branding the callous act a “robbery of the poor”.

The Echo understands that at around 10.45am on Wednesday, two parishioners were transporting the money raised when they were approached in the car park of St Aengus’s church by a lone male with a knife.

Father Ben Moran told The Echo that during the mugging, one of the parishioners received a stab wound in the arm and was brought to Tallaght University Hospital.

In recent days, St Aengus’s church was a vibrant hub of community celebration as families gathered for Communion and Confirmation preparation Masses and Giving Sunday services, an annual event organised by the parish.

Over the course of the services, people made donations to SVP’s indoor collection, while young people from the parish brought Christmas gifts for children in need.

The gifts have all been delivered.

Father Ben told The Echo: “This is very upsetting, it’s a robbery of the poor.

“It’s somebody robbing the Christmas of families in distress.

“I’m very upset, annoyed and disappointed. To have seen such great generosity and spirit [in the church over recent days] and then to see it stolen and snatched, it’s so disheartening.”

He added: “We had a lot of extra people in the church in recent days.

“We have had Communion and Confirmation masses and Sunday was ‘Giving Sunday’, which saw young people in the parish bring gifts for St Vincent De Paul.

“There was so many people here, and young families.

“The parish does appreciate the work of SVP, and a huge amount of money was raised, and gifts donated.

“The Season of Goodwill this [robbery] is certainly not.

“The person responsible must have realised there was a collection happening.”

In a statement to The Echo, a Garda spokesperson said that they are investigating the theft and assault of a person in Balrothery.

“A male threatened two people with a knife,” the spokesperson said.

“No arrests have been made and investigations are ongoing.”

Tallaght councillor and St Aengus parishioner Mick Duff (Independent) appealed to members of the community to help recover the funds.

“The sad part about it is that it’s a direct robbery on the poor, they’ve literally taken bread out of the mouths of the poor,” Cllr Duff said.

“I’m hoping people will respond to overturn the effects of this robbery and help us to recover these funds.

“It’s such a low act on vulnerable people.”

Despite the upset experienced by the parish of St Aengus, within a few hours of the robbery the community was banding together.

Fr Ben told The Echo that people had already been in touch looking to help, while a youngster from the area dropped into the church and made a €15 donation to SVP.

A GoFundMe Page (Replace Funds Stolen from St Aengus Parish) has also been established to try and replace some of the money stolen.

Anybody who has information on the incident or can be of assistance to gardai in their investigations is encouraged to contact Tallaght Garda Station on 6666000.