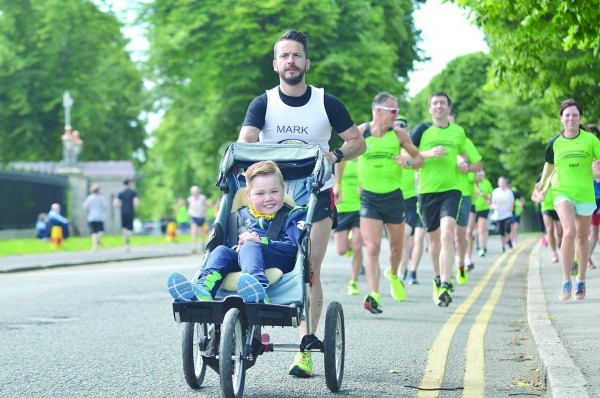 LUCAN-based Team James has raised €26,000 so far for Barretstown. In October, James Casserley (10) will compete in the Dublin City Marathon in his wheelchair accompanied by Mark Lacey. On Sunday, over 140 turned out to train with Team James in the Phoenix Park and €1,400 was raised.

They train in the Phoenix Park every Sunday morning and all are welcome to run with them.

James, who is from Lucan, was diagnosed with Cerebral Palsy when he was two. This affects his core and lower limbs mostly and leads him to have difficulty with independent walking and balance.

When James was six, he had a selective dorsal rhizotomy, a type of neurosurgery which eliminates the spasticity in his body which is a result of his Cerebral Palsy. The little warrior endured intensive physiotherapy as part of his recovery where he had to relearn to move and walk again.

More recently James was diagnosed with juvenile idiopathic arthritis (JIA), it is in most of his joints. As a result of this, he suffers from pain and lethargy most days. But this does not stop James, who has a very can-do attitude and a massive smile. He likes to put the ability into disability and show everyone he is just like any other ten-year-old.

After he was diagnosed with JIA, Crumlin Hospital referred him for a week of fun in Barretstown. Last March, the Casserly’s went down as a family for the weekend and James loved it.

He was then invited down for a week of fun on his own in July as part of their summer camp. This was James’s first time away from home without family. He came home oozing with confidence, with a smile that could light a room, revived and excited. Barretstown instantly became extremely special to James.

Before Christmas, James wasn’t feeling too well. Mark Lacey from Insanity Fitzone offered to help James get back on his feet.

They came up with the idea of running a race, which escalated to the SSE Airtricity Dublin Marathon which is 26.2 miles. James said Barretstown was the charity he would be raising funds for. He set a goal of raising €10,000, a goal he has already smashed.

With Mark’s help, James is set to become the youngest person to ever complete the Dublin marathon in a wheelchair.