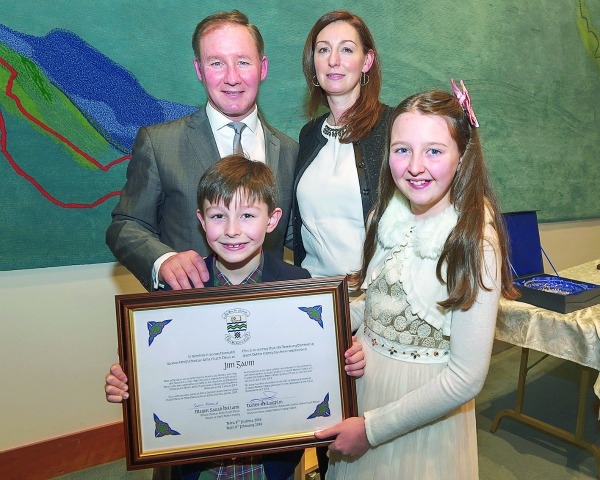 Jim is a true role model

A MAN who has brought so much joy to Dublin GAA followers over the last five years was recognised last Monday night when the Freedom of South Dublin County was awarded to Dublin football manager Jim Gavin.

The Dubs boss who guided Dublin to All-Ireland glory in 2013 and 2015 was joined by family members and friends at county hall to be awarded the council’s highest civic honour at a ceremony hosted by the Mayor Sarah Holland.

The Round Tower GAA club member said he was “humbled and honoured to receive the award and thanked the council for presenting it.”

Speaking of his time growing up in Clondalkin, Jim spoke about the influences in his life, he mentioned his father Jimmy and mother Ann and he had a special mention for neighbour Mary Dardis who was present on the night, and whose husband Aidan sadly passed away last year.

He mentioned growing up in St Patrick’s estate and attending school in Clonburris where teacher Frankie Roebuck worked and is part of the Dublin backroom team that successfully won the All-Ireland.

He then made the move to Moyle Park College where Johnny Roebuck also had a big influence on his career.

“My parents were a huge influence, my father ran his own haulage business and my mother was a teacher in Inchicore.

“Both Frankie and Johnny were teachers in the schools I attended and they had a big influence while at school”.

Jim had great praise for the Dublin County Board and secretary John Costello but had a special mention for his own club Round Tower.

“My club is one of the oldest in Dublin, formed in 1884 and it plays such a role in the community. We are proud of our club.

“I would like to thank the County Board for all their hard work and John Costello and also other local clubs in the area”.

Jim also praised his Dublin team saying that “he is working with a special bunch of players and that the management was there to support them and it’s the team that fulfil the team objectives and ultimately drive to success.”

The Dubs boss concluded by thanking his wife Jennifer, and children Jude and Yashim, for all their support.

Mayor Sarah Holland said she was delighted to be honouring Jim Gavin: “The reason I supported the nomination of Jim Gavin is not only because of the fact that he has achieved astonishing sporting success both as a player and a manager, but because he is an outstanding role model for the young people of South Dublin County.”

Cllr Francis Timmons, who nominated Jim for the award, said: “Jim Gavin is a super guy. He has done Clondalkin proud, he has done Dublin proud. He is an example and role model for many young sports enthusiasts.”

Cllr Timmons went to school with Jim in Clonburris and he said it was very obvious to see then “what is his lifelong enthusiasm and support for GAA’’.

Cllr Timmons added: “He has been Dublin senior football manager since 2012. He previously managed the under-21 football team to 2010 and 2012 All-Ireland success and played senior football with Dublin and Round Towers, Clondalkin.

Cllr Timmons ‘’Sometimes Clondalkin is in the headlines for the wrong reasons.I feel we should recognise people like Jim Gavin who represents the best of Clondalkin.”