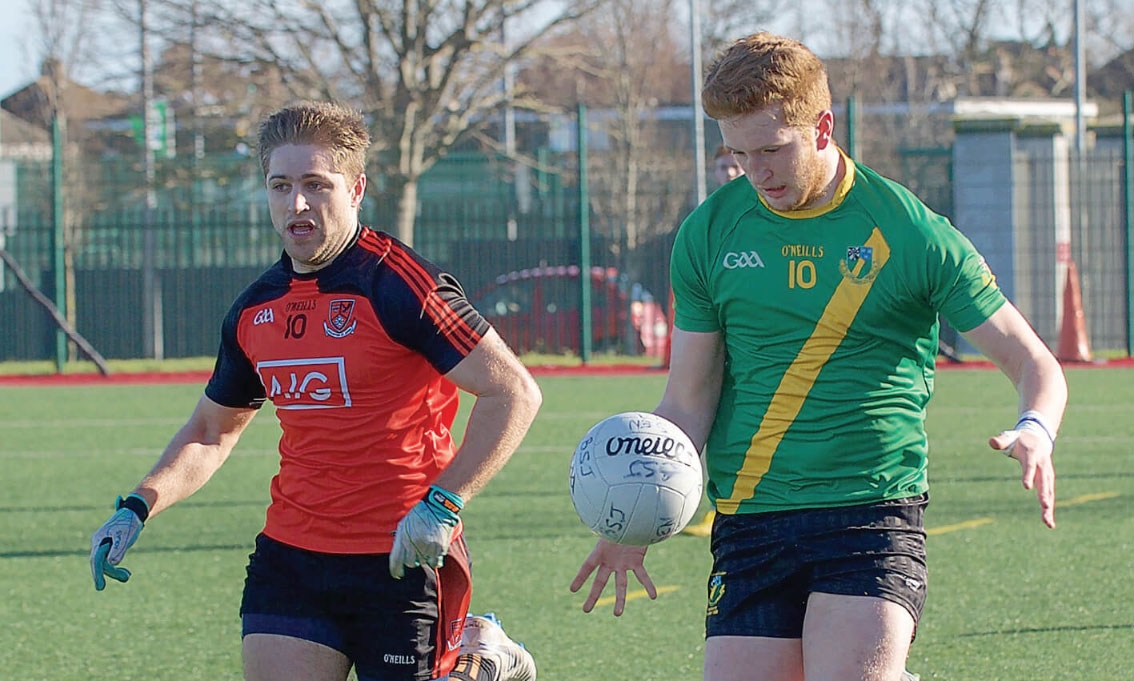 John’s on another ‘Teer against Davis

ON A BREEZY morning in Marlay Park, Ballinteer St John’s turned in a dominant display against Thomas Davis in their Adult Football League Division One opener as they ran out 3-11 to 0-12 winners.

Ballinteer shot into an early lead through the prolific Luke Naughton, who found the back of the Davis’ net after just 11 minutes.

Thomas Davis' Sean Farrelly is tracked by Ballinteer's Sean O'Tulaigh during their AFL Division One opener on Sunday.

Some fine performances from midfielders Donal Gormey and Peter O’Curry helped them dominate the early exchanges but captain Eoin Kirby did hit back with four points for the Senior Two Championship winners.

Fighting the breeze and a Ballinteer side eager for success in league proved a struggle for the Tallaght side, however, as they failed to take the lead and went into the break four points down.

Revelling in his role at full-forward was Aodhán Clabby, who combined superbly with his St John’s teammates on several occasions and played a part in Aaron Bradshaw’s goal just after the interval.

While Davis’ Sean Farrelly and Stephen Byrne Braiden chalked up a brace each down the other end, they could not find a way past St John’s shotstopper John Brian Carthy, with the former St Jude’s man excellent under the high ball.

The Tangerine men held firm at the back with captain Jamie O’Connor leading by example from corner-back as they faced into a strong wind in the closing minutes.

Points from Mark Nolan, Ryan Deegan and Peter Boland brought about a late comeback for Davis but their efforts were undone when Bradshaw found the net for a second time in the match.

Next up for Ballinteer is a trip to a newly promoted Skerries Harps team that was beaten by a St Vincent’s side that featured Diarmuid Connolly who kicked three points on his return to club football.

Skerries clinched the final promotion spot from Division Two after skipping past the challenge of Round Towers in the play-offs, and will be hot on the heels of Gail Dunne’s men in two weeks.

Meanwhile Thomas Davis welcome Ballymun Kickhams to Kiltipper Road on Sunday, March 3, with both eager to register their first points in the league this season.