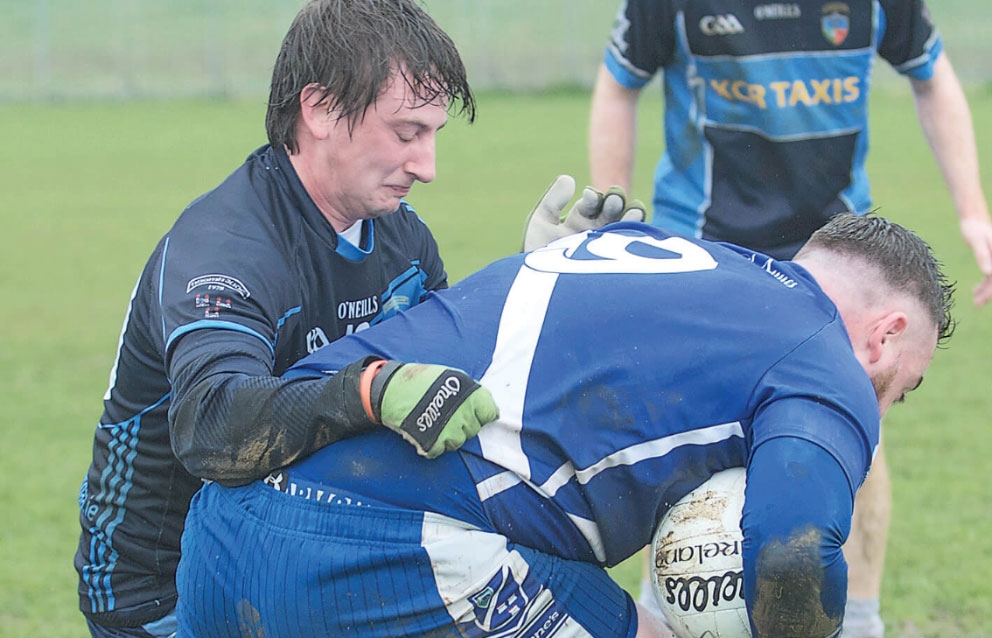 ST JUDE’S surmounted difficult conditions and a second half surge by St Anne’s to dig out a 2-7 to 0-18 win in their opening Junior Two Football Championship match in Bohernabreena last Sunday.

Playing with a favourable win and pitch gradient in the opening half, the visitors opened up a seven point lead by the break.

Bobby Moran gets to grips with St Anne's Ross Nevin

Anne’s did manage to reduce their arrears to three in a spirited second half comeback, but a timely free by Bobby Moran served to break their momentum and give Jude’s that bit of breathing room they needed to see out the match.

Conor Murphy served up two great scores in the first half for the Templeogue side when Moran also got on the scoresheet and Andy Moran applied the finishing touch to a fine team attack that began in the halfback line.

Anne’s had just a Conor Leigh point to show for their efforts before the break, but they began to exert a grip on proceedings with the help of a Phil Robinson goal after the break.

Leigh and Jonathan Doyle struck over the bar before Niall Bergin both and won and converted a penalty after he had been dragged down in his attempt to race on to a ball over the top.

But just as they looked to be closing the gap, Moran popped up to stop the rot for Jude’s with a comfortable free before Conan Cleere also struck over for the visitors.

It served to put them out of reach of their opponents who can still draw plenty of positives from their performance, particularly that of Minor players Jamie Carter and Joey Quinn who were playing in their first Junior Championship match.

Jude’s will be well pleased at getting off the mark early, leaving them on a sound footing for their clash with St Mary’s next week.