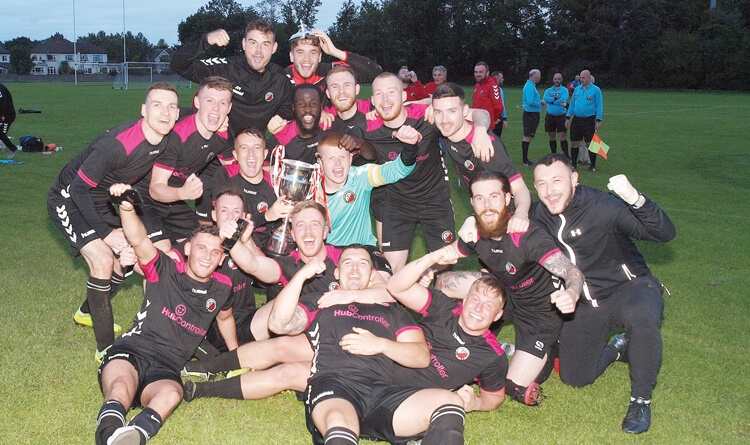 TALLAGHT United capped off a great second season in the UCFL when they added the Richard Knight Cup to the Division One title and Challenge Cup they had previously bagged, after a 4-0 win over Glasnaion FC in the VEC, Terenure on Monday night.

This game had it all- cracking goals, three red cards, two penalty misses and a man-of-the-match performance by Glasnaion keeper Evan White who produced save after save to deny the Tallaght attack.

Coming into the game United had just missed out on the Division One Shield after they were beaten two days earlier by Atletico Malahide 3-2, but they showed no signs of a hang-over as they dominated this game for long periods.

Dylan Kelly, as he has been throughout the season, was a constant thorn in the Glasnaion side and opened Tallaght’s account on 25 minutes when Colm Iveagh played the ball in for him to produce a bit of magic and find the net.

The second half began with an explosion as Glasnaion saw two players handed their marching orders in quick succession.

With just seven minutes of the second half gone, Conor Boland was shown a red card by referee Karl Nolan, after he took Liam Woods out of the game when he was bearing down on goal.

Eight minutes later it got even worse for Glasnaion when Gareth Malone was sent to the side line after an off-the-ball incident with Jamie Walsh.

It took United until the 68th minute to finally double their lead, as Jamie McEwan gathered the ball just inside the area and twisted and turned before finding the back of the net.

And with 12 minutes remaining Glasnaion were thrown a lifeline in the form of a penalty, Ian Webb stepping in to take responsibility, but his spot kick was brilliantly saved by Adam Niland.

However, Niland had moved off his line and was booked, his second of the game, resulting in him being sent off and the penalty re-taken.

Captain Robert Baxter went in between the sticks and as Webb took the spot kick again he dived to his left and smothered the ball.

That was that and it was no surprise when Tallaght added two more to round off a great season, McEwan and Woods finding the target.