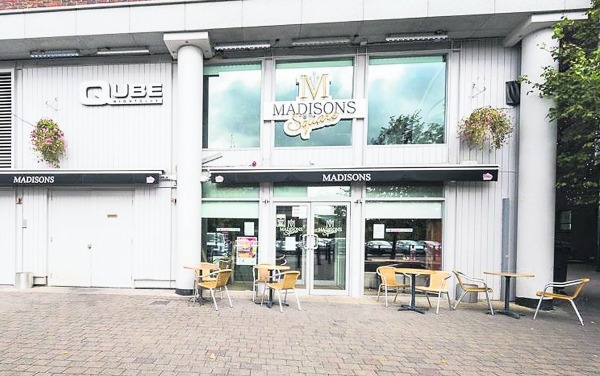 Last orders for Madisons at The Square

Madisons at The Square bar has called last orders, with the establishment closing its doors after less than 18 months in operation.

Located in the Tuansgate development, which lies close to The Square shopping centre and the Tallaght Luas stop, Madisons and its nightclub, Qube, were based in the building that was once home to the BluBar – which closed in 2010.

Throwing its official opening celebration in March 2015, Madisons arrival generated much excitement – with many believing its arrival signalled a new lease of life for Tallaght and its town centre.

However, it was not meant to be for Madisons, the doors to which have been closed in recent weeks.

The Tuansgate property, which housed Madisons, is currently being sold as an investment by receiver Declan Taite of Duff and Phelps, with John Ryan of CBRE handling the sale of the property – which is on the market since last year for an asking price of €650,000.

The property was being sold as an investment based on the 15-year lease that Whitney Taverns Limited, who ran Madisons bar, had and the €72,000 it was paying in rent per year. Madison’s was to be unaffected by any sale.

Despite the tenant vacating the property, John Ryan of CBRE told The Echo that a deal with a potential investor to acquire the property is still ongoing.

Mr Ryan said: “While there is currently no benefit of income coming off the tenant, there is an investor interested who sees the potential in the property and believes that there is opportunity to get another tenant in.

“Despite Madisons closing, negotiations with this potential investor are ongoing.”

The Metro Bar beside IT Tallaght, which is not connected to Madisons, has told The Echo that it will honour any deposits for up coming parties that were booked at Madisons at The Square.

The manager at the Metro said: “Anybody who had parties booked at Madisons and paid a deposit we will honour their deposit and help them to plan their party here at the Metro.

“We cater to all types of parties and would invite people to get in touch.”

The Echo did make contact with Madisons bar to ask about the closure, but a comment was not received.
Anybody who wishes to contact the Metro can call 5987625.

NEWER POSTVIDEO: Clondalkin residents chase rats out of estate
OLDER POSTLarkview Boys are on the rise