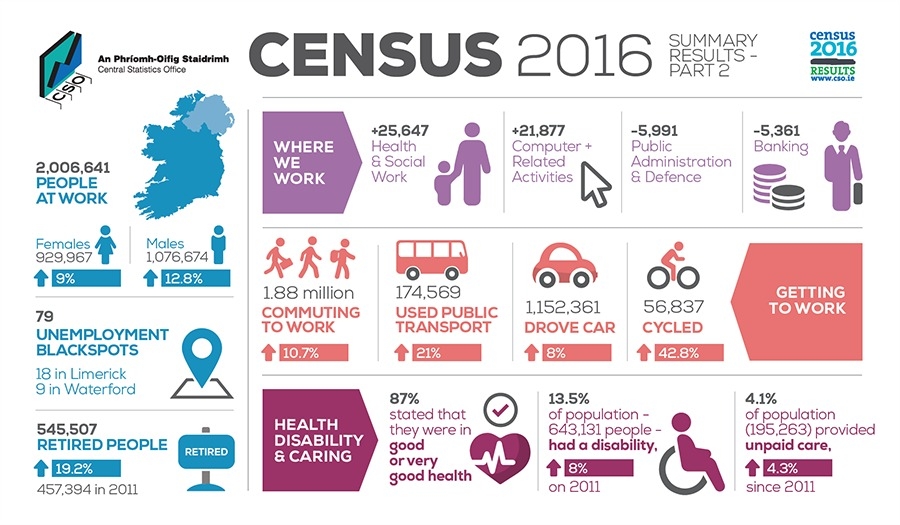 The latest Census figures released by the Central Statistics Office (CSO) today show two million people were in employment across the country in April 2016.

There were slightly more women than men in employment, while there were over half a million people retired.

A total of 79 unemployment blackspots were identified through the census, with two areas in both Tallaght and Clondalkin making the list.

John’s A in Limerick City topped the unemployment blackspot list, with 58.3 per cent, while Killinarden in Tallaght was the highest local area of unemployment with 32.9 per cent.

Clondalkin-Cappaghmore was slightly lower with an unemployment level of 32.2 per cent, while both Fettercairn (28 per cent) and Clondalkin-Rowlagh (27.2 per cent) also featured on the list.

Commuting habits for those in employment were also released, with the amount of people who cycle to work is up over 40 per cent compared to figures released after the 2011 census – while over one million people were driving to work and almost 175,000 were travelling to work by bus.

Speaking about the release of the latest figures, Senior Statistician Deidre Cullen said: “This report focuses on the socio-economic aspects of the census such as employment, occupation and education, as well as health, disability and caring.

“Between now and the end of the year these and other topics will be covered in more detail in our remaining thematic reports.  All of these reports will be available on our website – cso.ie.”