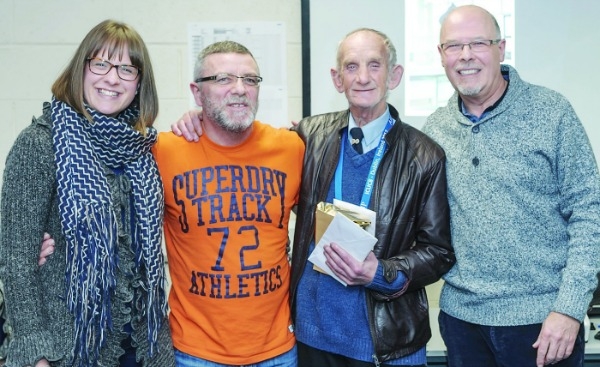 AFTER 20 years of providing “legendary” support and kindness to the staff and visitors of the Brookfield Enterprise Centre, George Connor last week hung up his car-park attendant hat.

Living in Jobstown with his wife Brigid, George (66) started at the Brookfield Enterprise Centre when it was built in 1996, first working in security and then, in 2012, becoming the centre’s main car-park attendant.

Praised by staff for his kind and gentle way, George officially retired from the centre last Friday, November 11, and hopes to spend his free time relaxing and travelling – when he’s not being kept busy by his 18 grandchildren.

“Myself and Brigid raised six girls and one boy and now, we have 18 grandkids – with the 19th on the way,” George told The Echo.

“I’m retiring, but I’m not really retiring, I’m sure my grandkids will keepme going.

“I’ll really miss working in the Brookfield Enterprise Centre, it was a big part of my life . . . everyone was like family to me.

“I loved meeting different people every day and helping out where I could. The staff were all fantastic, and they always stood by me and I’ll never forget that.

“It’s hard to meet good friends but in the centre, it was never a problem.”

George, who back in the eighties helped start a small community-based football club for dads and children in Kiltalown, teams which then played neighbouring estates, is hoping to do some travelling in his spare time.

“I’ve always wanted to travel on the trains and now that I have my pass and I’m retired, I’m looking forward to travelling up and down Ireland with Brigid,” George said.

Last Friday, the Brookfield Enterprise Centre staged a retirement party for George, who is a self-proclaimed Manchester United and Dublin supporter.

According to Rene Synnott, head of training at Partas, which is based in the enterprise centre: “Looking after security and manning the car park was not an easy challenge, but George possesses a kind gentle manner and despite being under pressure at times had the ability to defuse potential conflict in his own unique, courteous way.

“George is held in high regard by all of his colleagues and is known to everyone, man, woman and child, who attended the [Brookfield Enterprise Centre].

“George helped everyone in any way he could and his humanity and his kindness is legendary and he will be missed.

“We would all like to wish George health, happiness and lots of new adventures in his retirement.

“George has been a gentleman, colleague and friend and Brookfield will not be the same without him. Thank you George.”