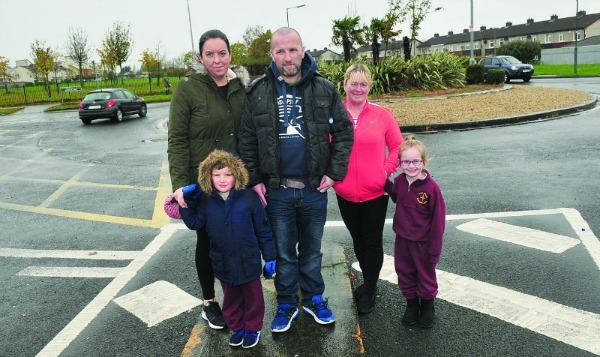 A SCHOOL community in Tallaght has this week put pressure on South Dublin County Council to introduce safety measures at the roundabout on Fortunestown Way, before a child is seriously injured.

According to the parents of children attending St Brigid’s Junior National and St Aidan’s National School in Brookfield, the roundabout on Fortunestown Way – which is used by children walking to and from school every day – is a safety hazard due to poor visibility and speeding cars.

Gary Walsh, the parent representative on the Parent and Teacher’s Association at St Aidan’s, told The Echo: “We’ve been raising this for well over a year now and nothing has been done.

“The visibility at the roundabout is really poor due to the bushes growing in the middle of it, and it’s hard for motorists to even see an adult walking by, let alone a child.

“There are a lot of kids coming through the roundabout daily from estates such as Russell Square and Sundale and every day their lives are being put at risk.

“The lollipop lady has also had a few near misses due to bad visibility.”

He added: “Cars are also travelling through the roundabout quite fast as there are no traffic calming measures or signs, which greatly adds to the risk posed to school kids.

“Between the poor visibility and speeding motorists, I’m gobsmacked nobody has been killed and I think it’s time that the council gets rid of the bushes and introduces safety measures at the location.”

Tallaght South Sinn Féin councillor Louise Dunne confirmed to The Echo that a pedestrian crossing with lights is being installed on the stretch of road as it veers, from the roundabout, in the direction of Lidl.

Cllr Dunne said: “The pedestrian crossing is being put in for the primary and secondary schools and hopefully it will provide kids with a safe crossing and slow traffic down.

“There has been a number of accidents at this roundabout and I’m 100 per cent behind residents and their call for something to be done.

“These schools cater to a huge catchment area and it’s a nightmare trying to see as you come around that roundabout – and I will be asking the council to remove those bushes.”

She added: “There are also problems around the schools with drop-up and pick-ups, and the traffic is sometimes so bad that a community Garda has to come and divert traffic.

“This adds to the risks posed to children and adults and is something that we’re working on in the council to alleviate.”

When contacted by The Echo, South Dublin County Council said that it is in the process of investigating the issue.