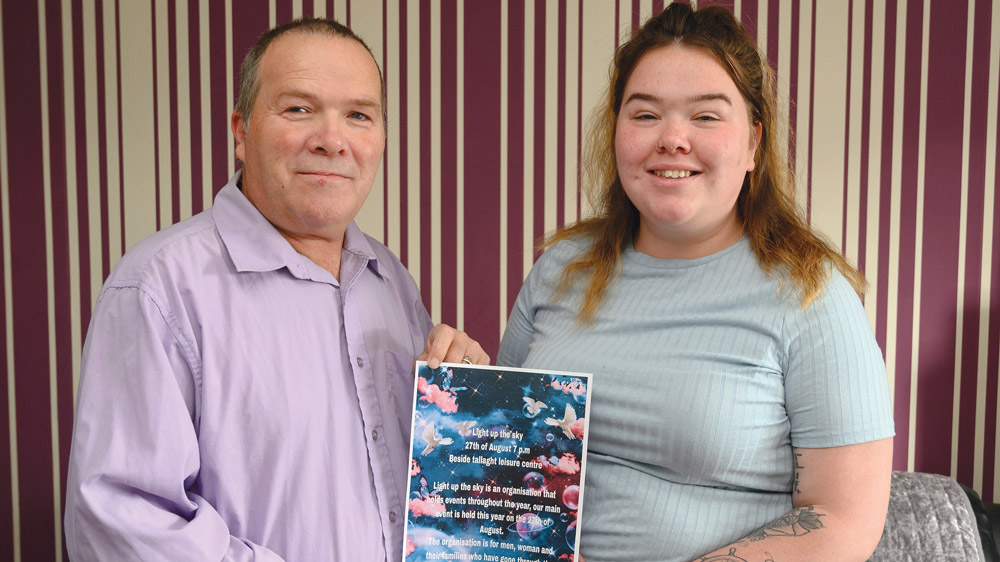 Mark and Melissa Luttrell, helping those who lost children with this special event to remember them

Light Up The Sky event to remember our ‘little angels’

AN EVENT to remember babies and children who have died and gone on to be ‘little angels’ will be held beside the Tallaght Leisure Centre this Saturday, August 27, at 7pm.

Called Light Up the Sky, the event was created by Jobstown father and daughter Mark and Melissa Luttrell and is now in its seventh year.

Melissa, 26, co-founded Light Up the Sky with her dad after she lost her first baby through miscarriage at three months in 2015.

She previously told The Echo that after her miscarriage she was handed a leaflet in hospital with a list of counsellors, but that she wanted somewhere to go where she could recognise her child’s existence.

Melissa’s dad, Mark, told The Echo: “This is our seventh event, we held our last two events in our back garden.

“It means a lot for the parents and families who need somewhere to go, and for them to meet other people in the same situation.

“They can celebrate their child and their loss, and Light Up the Sky can be a special memory for them.

“My daughter said other people found it hard to go to a graveyard, or some didn’t have graves to go to, but this way they can remember their little angels somewhere nice.”

The early genesis of Light Up the Sky began shortly after Melissa miscarried her baby, who she affectionately called ‘Tic Tac’, when she released a lantern in her garden in her baby’s memory.

“Light Up the Sky started because Melissa was going through her own grief. She had a miscarriage, so she had no grave to go to, so she lit a lantern in the back garden and let it go, and that’s how Light Up the Sky began.”

A balloon and lantern release were features of the Light Up the Sky in previous years, however this year the Luttrells want to put on a more eco-friendly event.

Instead, there will be bubbles and a dove release, and the names of the children of attendees who have died will be read out.

For further information visit the Light Up the Sky/Tree of Angels Facebook page.