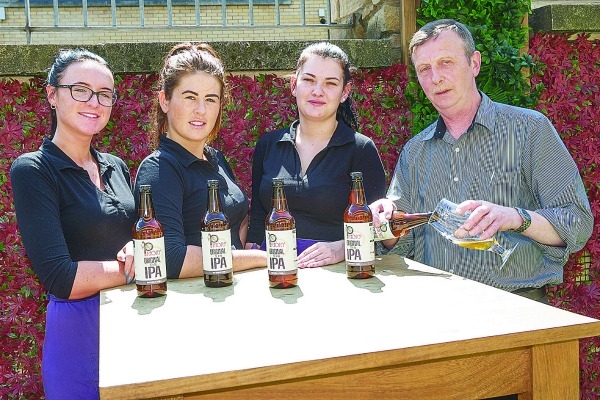 Local pub believes in importance of business to business support

THE Kiltipper Café Bar is the first Tallaght pub to stock local craft beer, Priory IPA – with the Marlfield pub believing in the importance of businesses to business support in local communities.

Priory Brewing is a new micro-brewery in Tallaght Village which, run by Partas, the enterprise development agency in Tallaght, is the country’s first social enterprise brewery – with all profits being reinvested into local economic development and jobs.

Alongside being a start-up business and generating employment, Priory Brewing is toasting the Tallaght’s rich heritage, which saw a small brewery hop garden located on the grounds of the Priory more than 250 years ago.

Robbie Kavanagh, owner of the Kiltipper Café Bar, told The Echo: “We have a big interest in craft beers and when we heard that there was a local one, we knew we had to stock it.

“We have crafts beers from all over the country and it’s great to now have one from Tallaght.

“It’s going down very well with customers and we’re hoping to have it on draft in the coming days.

“It’s a really nice beer and would be one of the better craft beers.”

Originally from Belgard Heights and now living in Saggart, Robbie added: “I think it’s very important to support local business and we’d use a lot of Tallaght businesses for stock and services like tradesmen and printing etc.

“I think local people want to support local businesses too and if we can provide a good, quality product sourced locally to our customers then it’s a win-win for everyone.”

Bernard Bennett, Priory Brewing director, said: “The whole idea behind the craft brewery was to get people in the area to have pride in their hometown and to support each other and local employment… and it’s great to see the Kiltipper Café Bar taking us on.

“Robbie was very energetic around the idea and really wanted to support the brewery as a new local business and to support his area… as all of the profits from the enterprise go back into supporting new and start-up businesses.”

Priory Brewery is now also stocked in the Brickyard in Dundrum, which has named the IPA as Beer of the Week.