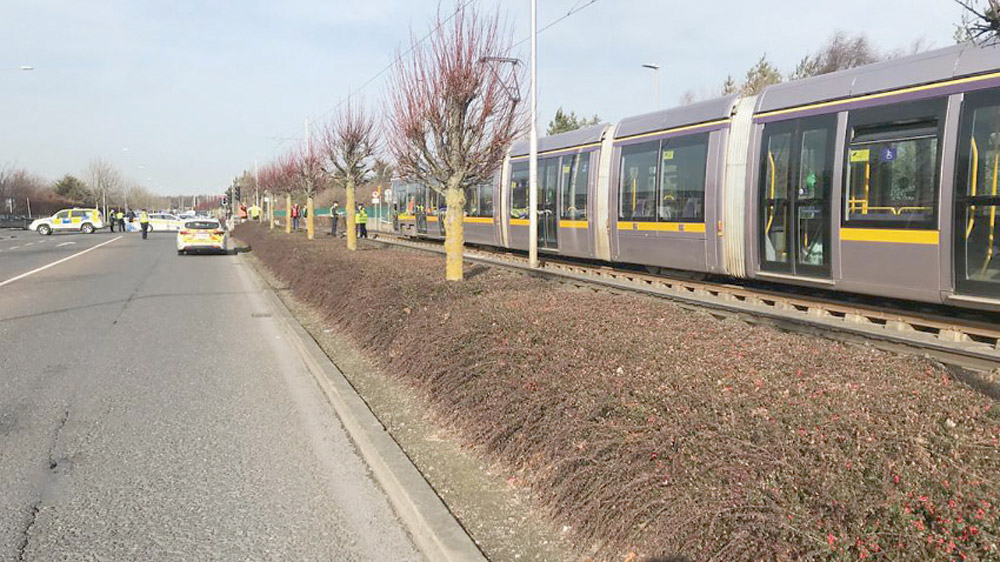 The speed limit on a section of the Luas Red Line near Tallaght was lowered from 70km/h to 40km/h following a fatal incident in which an elderly pedestrian was struck by a tram, an inquest has heard, reports Seán McCárthaigh.

A sitting of Dublin District Coroner’s Court into the death of Patricia Quinn (71) heard conflicting evidence from witnesses representing Transport Infrastructure Ireland and Transdev, the Luas operator, over who had decided to reduce the speed limit.

Ms Quinn, a married mother of five from The Meadows East, Belgard Heights, Tallaght, suffered fatal injuries after being struck by a tram on a pedestrian crossing between the Cookstown and Tallaght Hospital stops on February 14, 2019.

Evidence was heard that Ms Quinn stepped out from behind a passing citybound tram into the path of a tram going in the opposite direction at the crossing at Cookstown Way.

Lawyers for the victim’s family suggested the 70 km/h speed limit which was in operation at the time on that section of track was “high and excessive”.

A Garda witness said a public road which ran alongside the tramlines had a speed limit of 50 km/h.

Transdev’s head of health and safety, Eoin Kennedy, told the inquest that no recommendations had been made as a result of an internal investigation by the company into the fatal incident.

In response to questions from counsel for the Quinn family, Aedan McGovern BL, Mr Kennedy said Transport Infrastructure Ireland was responsible for setting speed limits on the Luas system.

He said no instructions had been given to tram drivers to lower their speed when approaching pedestrian crossings following Ms Quinn’s death.

Mr Kennedy stressed that the drivers and the tram had functioned as they should have during the incident.

Under questioning by counsel for TII, Mark O’Connell SC, Mr Kennedy accepted the setting of speed limits by TII involved inputs from Transdev.

Mr O’Connell pointed out that Transdev had previously lowered speed limits where it believed it was appropriate to do so.

Mr Kennedy replied that it had been done “in consultation with TII”.

Mr Carbone said the overriding of original speed limits on the Luas system by Transdev had been “quite a common occurrence”.

He understood that Transdev had taken the decision to lower the speed limit on the section of track near the Cookstown stop following the death of Ms Quinn.

Mr Carbone added: “And TII did not object.”

The driver of the tram which struck Ms Quinn, Robert O’Neill, who was a trainee, told the inquest he immediately deployed an emergency handbrake in accordance with standard operating procedures when he saw Ms Quinn about to cross in front of him.

Mr O’Neill said operating the emergency handbrake automatically resulted in the tram’s chime – or “ding-ding” sound – being activated but not its horn.

A Transdev instructor, Wayne Clifford, who was accompanying Mr O’Neill in the cab of the tram, also applied a safety brake.

Mr Clifford, who was visibly upset in the witness box, said the pedestrian had kept walking before he heard a scream and saw the glasses being taken off Ms Quinn’s face by the impact.

“There was no time to press the horn. It all happened so quick,” he added.

Evidence was heard from Transdev witnesses that applying the second braking mechanism had the effect of reducing the braking capacity of the vehicle and lengthening its stopping distance.

Mr McGovern pointed out that Transdev’s operating manual only allowed for one driver to be in the cab.

An investigation conducted by the Health and Safety Authority recommended no prosecution should result from the incident.

A forensic collision investigator, Garda Patrick McEvoy, said Ms Quinn’s body had travelled 15.5 metres from the point of impact before coming to a rest.

The tram travelled just over 50 metres from the collision before coming to a stop.

Garda McEvoy said it was calculated that the tram had been travelling at 66 km/h as it approached the pedestrian crossing which had slowed to 56 km/h at the point of impact.

He estimated that the emergency brake had been applied about 20 metres before the crossing.

Garda McEvoy said the speed at the point of impact would have been reduced to 53km/h if the second braking mechanism had not been applied.

However, he said the collision was “imminent and unavoidable” regardless of whether one or both braking systems had been used.

At the same time, he replied to Mr McGovern that the potential stopping distance would have been shorter if the speed limit had been 50 km/h on the track.

Garda McEvoy said CCTV footage appeared to show Ms Quinn looking towards the oncoming tram but her view might have been obscured by various poles.

While there are no EU regulations governing sound levels from warning alarms used by tram drivers, the inquest heard evidence that the horn sound was reduced to 85.3 decibels from the recommended level of 93 decibels used with heavy rail engines due to “wear and tear”.

The victim’s husband, Laurence Quinn criticised signage alerting the public at the pedestrian crossing to “look both ways”.

“It is not adequate and this accident is proof of it,” he remarked.

Mr Quinn told the inquest that he had dropped his wife off in his car that morning near the Square in Tallaght to get a document photocopied.

He said his wife would have been familiar with the area around the pedestrian crossing as she walked regularly near the Luas line.

He told the coroner, Dr Clare Keane, that his wife was slightly short-sighted but did not need a hearing aid.

Asked about her mobility, Mr Quinn said his wife was “exceptionally fit” as she was a regular walker.

The inquest heard Mr Quinn was returning home a short time later and had seen the roadblocks around the scene of the accident without realising it had involved his wife.

A jury of six women returned a verdict of accidental death.

The jury recommended that speed limits should be reduced at all pedestrian crossings on the Luas network, while they should also contain clear markings informing pedestrians that trams had the right of way.

They also recommended that chimes should be sounded on the approach to all pedestrian crossings, while drivers of trams which passed near such crossings should stop if necessary if they do not have a clear view of the area.

Expressing her condolences to the Quinn family, the coroner said she endorsed the jury’s recommendations.

Relatives of the victim declined to comment on the outcome of the inquest.