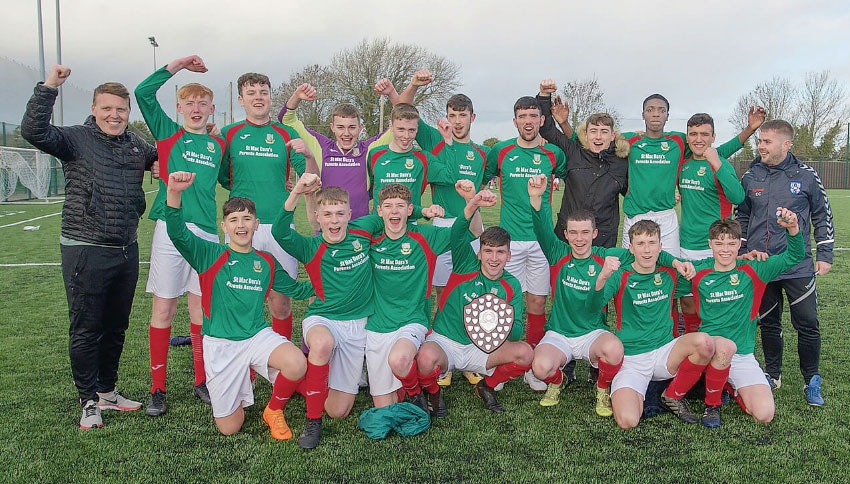 ST MacDARA’S CC prevailed in an epic South Dublin League decider against Moyle Park College, winning out 3-2 in Greenogue on Wednesday to reach the provincial stages.

The Clondalkin side could not have gotten off to a worse start, falling behind to an Alex Rafferty penalty and losing captain Mikey Fowler to a red card within five minutes.

Yet, despite this major setback, they dug deep and twice fought back on to level terms to head in at the break tied with their Temp-leogue opponents 2-2.

Aidomo Emakhu made it 1-1 after 16 minutes when he robbed possession and steered home from some 15 yards.

And Moyle Park went close to taking the lead, but Sean O’Mahony’s goal was ruled out for offside and instead they fell behind again when Conor O’Toole found Aaron Murray in the box and he made no mistake from close range.

Yet, Moyle park kept fighting and again restored parity just before the halftime whistle when Dylan Stack played Emakhu through and he sent the ball through the legs of the opposing netminder.

Moyle Park were unlucky not to add to their tally in the second half as Zach Donohue hit the post and Sinclair Armstrong headed just over before they had another goal disallowed, this time Emakhu being denied his hat-trick.

MacDara’s looked to be in trouble when O’Toole was shown a second yellow, but it was they who took the lead once more when Rafferty’s long range free took flight in the wind and landed in the back of the net.

Again the Clondalkin outfit, for whom centre back Euan Curran turned in a magnificent performance, went close to drawing level, but Dylan Stack’s effort at the death was cleared off the line by Stephen Sweeney to see MacDara’s progress.