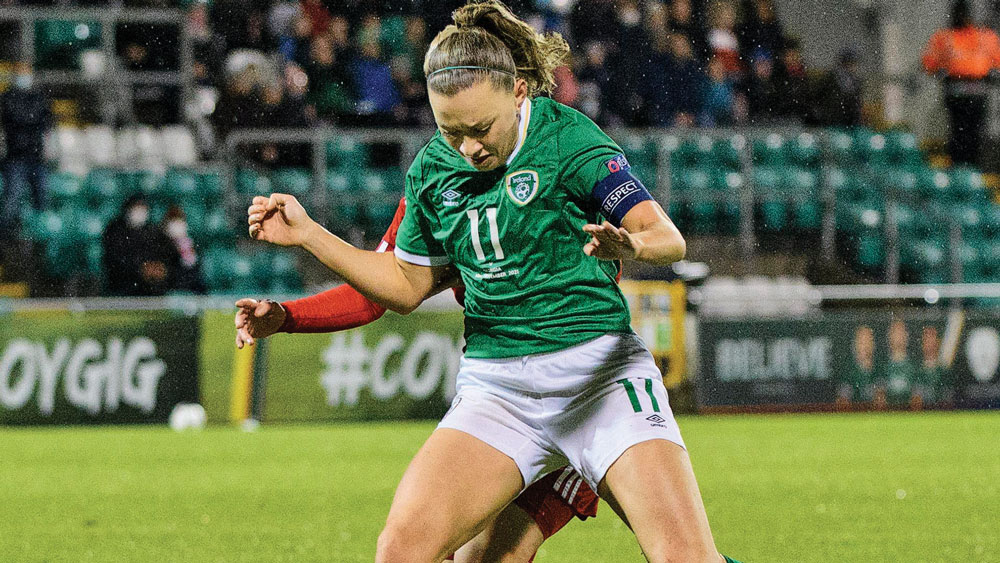 KILNAMANAGH’S Katie McCabe bagged a hat-trick as the Republic of Ireland Senior Women’s National team secured an emphatic 9-0 win over Georgia in their Group A FIFA World Cup qualifier at Tengiz Burjanadze Stadium in Gori this evening.

The Ireland captain got on the end of a Denise O’Sullivan pass to open the scoring with just under six minutes gone on the clock.

Galway native, Niamh Fahey followed up with her first senior international goal and Player of the Match, Megan Connolly also fired home off a McCabe corner on 18 minutes.

The Irish performance levels did drop off to an extent, but a second goal from McCabe in stoppage-time ensured Vera Pauw’s charges were 4-0 in front and well on course for a third win in this campaign.

Along with Amber Barrett and Denise O’Sullivan, Louise Quinn was one of three former Peamount United players in the Ireland starting line-up.

She headed home deliveries from Connolly and McCabe in the 49th and 73rd minutes respectively to keep the scoreboard ticking over for the visitors.

Now the standalone top-scorer in the group, McCabe crept inside the box with 15 minutes remaining to fire home her side’s seventh of the night and also secure the match ball in the process.

There was no let-up from Ireland as the final whistle approached, however, and Abbie Larkin (with her first at international level) and O’Sullivan rounded off the scoring with smooth finishes.

Ahead of their meeting at Tallaght Stadium in September, Ireland have now leapfrogged Finland into the runners-up spot in Group A and are now within sight of a place in the World Cup play-offs