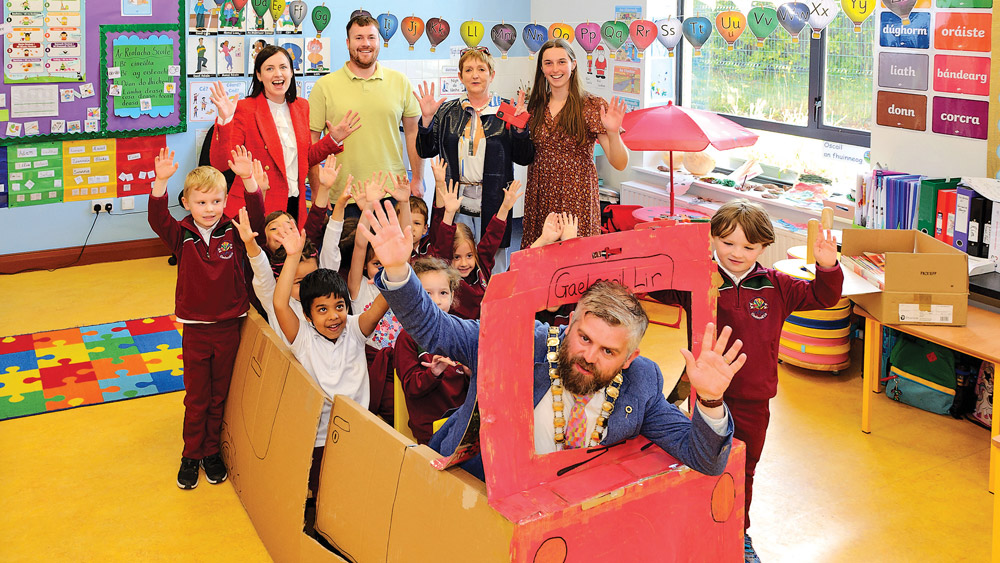 IT IS very much all aboard at Gaelscoil Lir as the Irish-language school, whose majority of its pupils come from Ukraine, celebrates a successful first year in operation.

Some 6,824 arrivals from Ukraine have enrolled in Irish schools since the escalation of Russian-Ukrainian War in February.

The 4,794 children of those Ukrainian refugees are enrolled in primary schools.

A new Irish-speaking primary school, Gaelscoil Lir, has welcomed eight Ukrainian children who are currently living in Citywest Hotel into their roll-books.

At present, the new multi-denominational gaelscoil has 14 pupils in Junior Infants and they are starting to turn their attention to moving premises for the new term in September.

Next term, 22 new pupils will be joining Junior Infants in the school – six of whom are Ukraine refugees – while the staff is set to double to accommodate their development.

On Friday, June 10, Mayor of South Dublin, Cllr Peter Kavanagh, paid a visit to the new school with the news that they there will be a new autism classroom coming to the school and to say ‘dia dhuit’.

“Mayor Peter Kavanagh made an official visit to Gaelscoil Lir, as a new gaelscoil in the area, as he comes to the end of his term as mayor,” Principal Sinéad Bheilbigh says to The Echo.

“He wanted to draw attention to the fact that there is an autism unit coming to the school and that these things can happen in a gaelscoil.

“There is absolutely no reason why a child with autism can’t go through school through the medium of Irish and the introduction of an autism classroom shows this.

“We have eight new children in the school from Ukraine and their ability to learn Irish is incredible.

“Their parents are so supportive of the Irish language, they’re learning a few bits of gaeilge on Duolingo as well to pick up their own cúpla focal.

“The kids really have developed so well over the last few weeks and months, and it’s good for the parents to see that they made the right decision in sending their children here because the standard of teaching really is so high.”

Following the visit to the school, Cllr Kavanagh was expressed how he was “blown away” by how quickly the Ukrainian pupils have acquired an understanding of the Irish language.

“I think what they are doing is very progressive as a new gaelscoil,” Mayor of South Dublin, Cllr Peter Kavanagh told The Echo.

“I was amazed when a few Ukraine refugees greeted me in Irish when I arrived at the school.

“The principal, Sinéad Bheilbigh, is doing a lot of incredible work with the school.

With an emphasis on providing an unmatched pupil/teacher ratio, Gaelscoil Lir has seen all of its Junior Infants pupils thriving.

“To achieve a level of Irish-fluency through the English medium really is quite difficult because you’re only engaging with the language for a few hours a week,” says principal Bheilbigh.

“What we have found, particularly with there being so few of them at the start of the year, is that the children’s comprehension is unbelievable.

“They’re able to express themselves already through the medium of Irish at such a great level already for Junior Infants that I’m confident they’ll all achieve a level of fluency by Sixth Class.

“Statistics and research shows that reading scores through the medium of Irish is higher than that of through the English-medium schools.

“So, what we’re finding is that learning through the Irish medium doesn’t impede them in any way, it actively contributes to an increased level of understanding.”