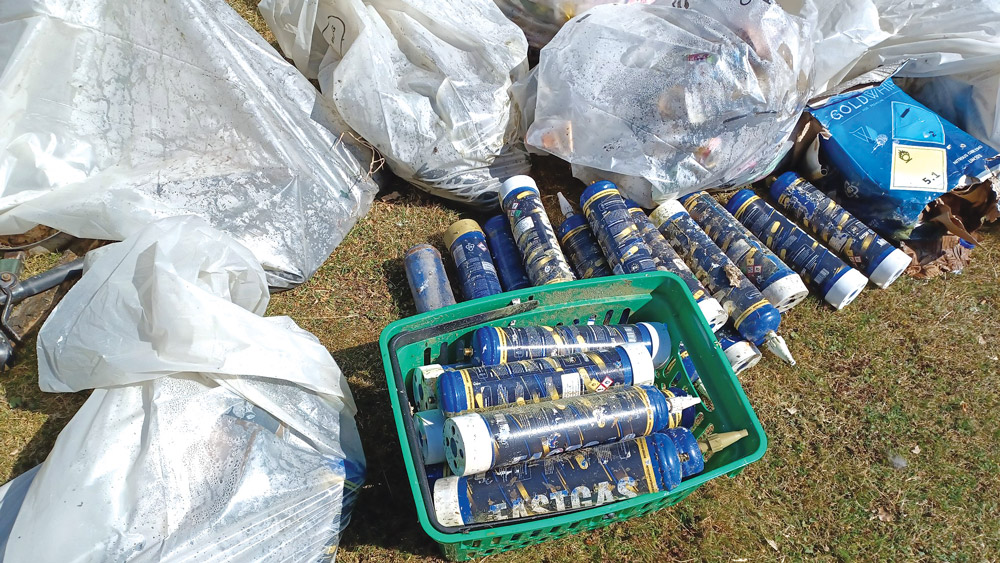 Some of the 38 cannisters found in Killinarden Park

Misuse of nitrous oxide still a problem with young people

IT APPEARED that the issue with nitrous oxide misuse had “turned a corner”, but larger commercial grade canisters have become more prevalent with young people being “incentivised into misadventure”.

On the streets, the nitrous oxide canisters are known as silver or purple bullets, hippy crack and laughing gas among other things and are very easily accessible on the black market.

Scattered small silver canisters, which are used as cream chargers in the catering industry, became a fixture on streets around South Dublin over the last few years due to an increase in misuse.

Larger blue-labelled 615g “disposable cylinders”, which are the equivalent of 85 of the small silver canisters, appear to have increased in popularity recently.

Through a particular brand, customers can sign up to become a distributor of these larger canisters as “becoming a distributor has never been easier”.

Images shared by Cllr Derren Ó Brádaigh showed more than 60 containers discarded in boxes and scattered across the ground along with balloons at a location in Liffey Valley on Sunday morning.

“The misuse of nitrous oxide is dangerous, and it is listed as a substance by the HSE,” Sinn Féin Cllr Derren Ó Brádaigh tells The Echo.

“It appeared that we had turned a corner with this, but now there is an opportunity there for people to make money through becoming a distributor of these large commercial use nitrous oxide canisters.

“Anyone can very easily place an order and there is even a clause to become a distributor, which can offer total anonymity on the delivery. 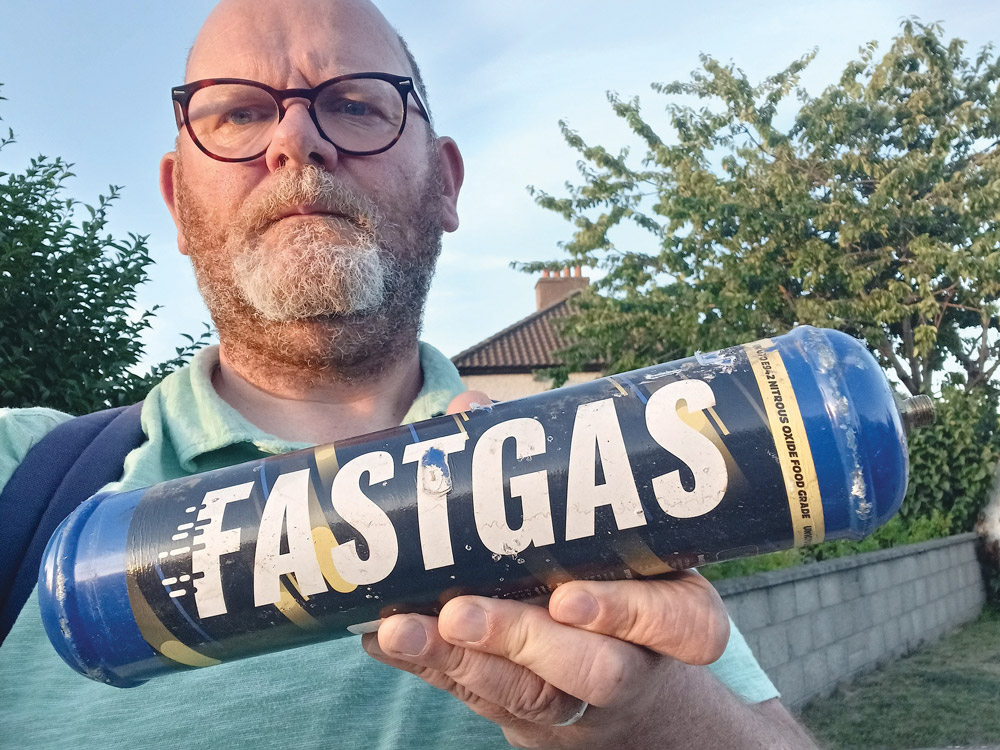 “This company boasts a one-day turnaround for dispatch if you place your order before 3pm and they say that they don’t use logos on the box.

“It literally says that it arrives anonymously at your doorstep, or if you ‘order for a friend’, with the hashtag ‘#justaskingforafriend’.

“That’s why we have these significant finds of boxes full of empty commercial grade 615g canisters.

“Now it’s becoming a business opportunity for would-be entrepreneurs, with young lads being incentivised into misadventure.”

Cllr Ó Brádaigh calls for a crackdown on the issue, tougher legislation to be implemented and raised questions around customs checks, believing this is “exposing a weakness”.

While long- and short-term risks associated with nitrous oxide misuse are still being established, it is known that heavy frequent use and large doses create more of a risk.

If inhaled directly from a canister and not a balloon, it can cause damage to the throat and impact breathing or if mixed with other substances it can be more dangerous.

The gas is usually inhaled by discharging it from a canister into a balloon, creating a brief “high” for the user.

Meanwhile, in Killinarden Park, some 38 expended large blue nitrous oxide canisters were discovered during a clean-up.

Seán Crowe TD, who is chairperson of the Oireachtas Health Committee, attended the clean-up and expressed concerns around the psychological and physical impact of using the substance. 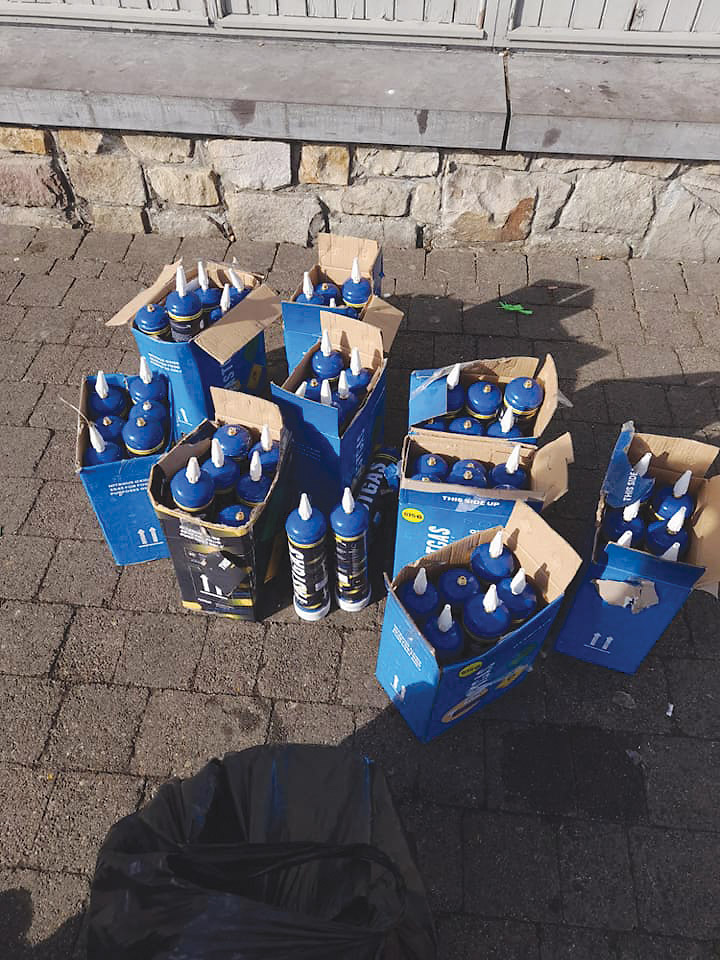 “There was rubbish and other items in the area, but this issue with the nitrous oxide is a challenge in itself,” Deputy Crowe tells The Echo.

“People need to step up and take responsibility for the children and young people who are taking these, because it is a gateway drug and people could eventually end up on something else in the future.

“It’s only a matter of time before somebody gets seriously hurt taking this.”

Legislation is being drafted to try combat the misuse of nitrous oxide, with separating what is legitimate and illegitimate possession of the canisters proving to be a sticking point.

Cllr Daithí Doolan also found an industrial-size canister, which is used in the medical and industrial industry, in Drimnagh recently.

“The company pride themselves on their website that will send nitrous oxide directly to the purchaser in discrete packaging with out any labelling,” Cllr Doolan said.

“Clearly they know it’s being bought for non-industrial use.

“Sometimes young people put it in balloons and inhale it or inhale it from ‘silver bullets’. Inhaling this industrial gas can be dangerous.

“Residents and youth services have confirmed with me that industrial-sized canisters have been found right across Dublin.

“I would make a plea to parents. If you do suspect your child or any young person is inhaling nitrous oxide, don’t panic.

“Don’t bury your head in the sand. You’re not alone. Get information about it. Talk to your children about it.”

The HSE have issued advice for parents through www.drugs.ie which encourages open communication around drug use and the commonly associated dangers.

A pilot mapping project by South Dublin County Council, which logged locations where canisters were found recently concluded, with the results due.