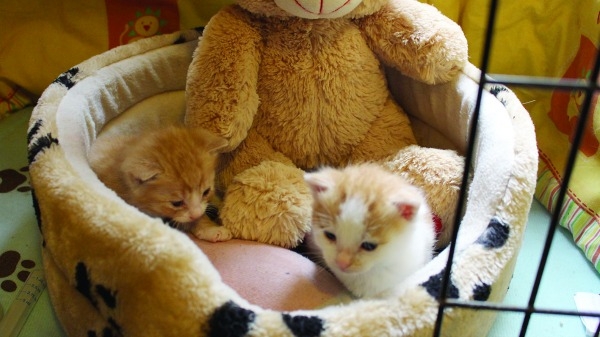 New-born kittens are cruelly thrown through a front door

NEW-born kittens were thrown through the front door of a house in Clondalkin on Sunday – the latest case of animal abuse that seems to show no sign of slowing down.

Meanwhile on April 10, a puppy with its tail cut off, was thrown out of a car on Boot Road and left to die, before being saved by Clondalkin Animal Aid (CAA).

CAA are a small non-profit volunteer organisation – one of a few small groups scattered across the country – that save animals because no-one else will.

The group was started by Claire Sherry, and along with Anne McDonnell and Rachel Johnston, the trio work tirelessly, investing their own time, money and sanity against a relentless tide of animal abuse.

The trio keep saved animals in their homes, until they can find them a foster home.

The Echo has covered multiple incidents over the last year alone, which include lamping, baiting, blooding, and abandonment.

“We are inundated, and see some horrendous things – if anything it’s getting worse” said Anne.

“We’re the only organisation that answers the phone out-of-hours. There is nobody that you can call after 5pm if you hit a dog. Vet fees are huge, gardaí don’t want to know, and we are lucky if we get €5k a year in funding.”

The new-born kittens – Curly and Mo – were discarded, because a resident thought one of his neighbour’s neutered cats in Harelawn was responsible for the pregnancy.

“The two girls tried every number they could, even brought the kittens to Rathfarnham Garda Station, but eventually they got our number,” said Rachel, who joined the group a year ago.

The office room in Rachel’s Clondalkin home has turned into an unofficial cat shelter, with up to sixteen felines in care.

“The problem is, where are their siblings?” said Rachel.

“I often go on Done Deal to retrieve cats, because in most cases, they will be taken and used as bait. There is a lot of blooding and lamping going on in Clondalkin.

“Curly and Mo had eye flu and required eye-drops, which cost €60, whilst the kittens here, will, require vaccinations, which cost €50. St Francis vets in Inchicore give us a small discount, but vets in general are very expensive, and we don’t have the money.”

Rachel continued: “Some people think we are a business or charity, but we need support, or more volunteers to foster animals, or take care of them for treatment, which can be time consuming.”

Managing the Facebook page for the group, Rachel can receive up to 80 messages on a busy day.
“I’ve been threatened for taking care of abused animals, and criticised for not getting back to a post immediately, but I have a job, and can only do so much,” said Rachel.

Anne continued: “We got a call recently, that a car hit a deer. Nobody would help, so we went to Ticknock, and ended up paying a vet €420 to give it an injection to put it to sleep.

“Sunday was very busy, I ended up in UCD until midnight with a pregnant dog – and had to return at six in the morning. It costs €200 to be seen at UCD, and the treatment was €400.

“I took a week off work to prepare for something else, but have been so busy with this. I’m going back to work in September for rest. I’m sick to death of the whole thing.”

CAA are having an open day in Newlands Garden Centre on Saturday (10am to 6pm).

Residents can view and foster a cat or dog – even if it is just a short-term arrangement.