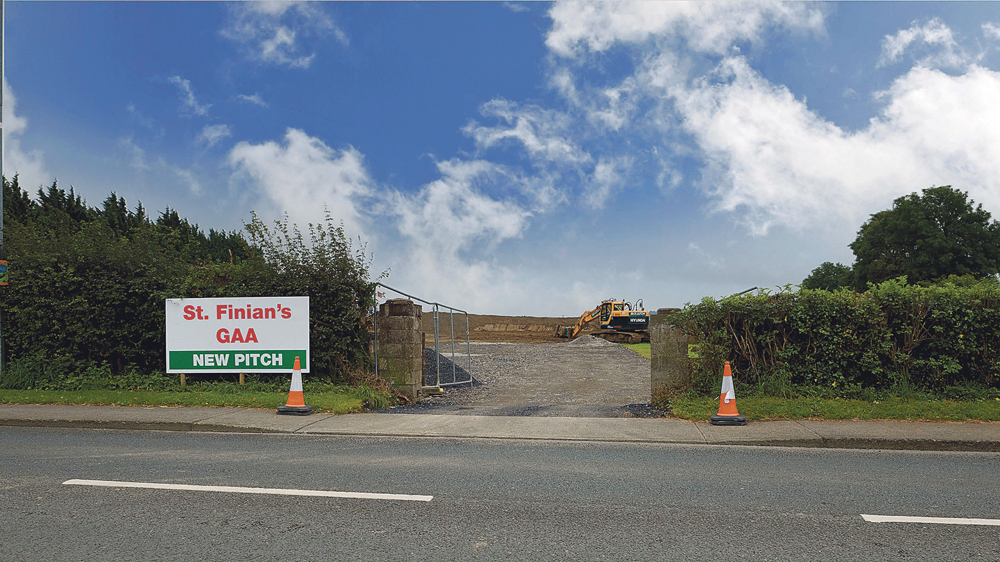 The site at Rathcoole where the new pitch will be developed

A BENEFACTOR is providing land to a GAA Club free of use, and is planning to develop a €150,000 playing pitch for it, to meet the demands of expanding playing numbers.

St Finian’s GAA Club are enthused this week after long-time club member Con McCarthy pledged to provide land at Rathcreedan, Rathcoole, and cover all associated costs for development of the club.

“I’m providing it free of use, we’re building a playing pitch for the use of St Finian’s because they are under ferocious pressure to provide for their playing numbers – particularly in the juvenile section,” Mr McCarthy told The Echo.

“We tried to get the bigger deal over the line, we had a plan to build an all-weather pitch, basketball courts, dressings rooms, a park and a small amount of housing to support it, but it didn’t get the support from the councillors.

“The council should be providing these facilities and amenities in anyways.

“But look, we’ve come up with this as sort of a stopgap, an interim solution to meet the pressures of the club.”

In a statement released by St Finian’s on social media, they said that “Con will cover all associated costs, in immediately developing the lands into a playing pitch, ready for our ever-expanding teams, in time for the 2022 season.”

Tackling the development head-on, Con is planning to have the land seeded by the end of September – weather permitting.

After that, the plan is to install drainage in the pitch, erect goalposts and ball-catch nets – with the entire project expected to rise to a cost of around €150,000.

While the GAA Club were hoping that the playing pitch would be ready to go for the commencement of the 2022 season, it seems as though it won’t be ready to go until later in the year after the torrential rain last week.

A simple question was put to Con McCarthy during an over-the-phone interview last week – “what’s in it for him?”.

“I’ve been involved with St Finian’s since I moved out to Newcastle, so since around 1990,” he says.

“My children were four and five at the time, they’ve played with the club and I’ve been involved in the club ever since – I’ve worn the St Finian’s colours for a long time.

“I’ve been involved for basically all my life and thankfully, I’m in a position now where I’m able to help.”

The land, which is adjacent to the recently approved Horse Sport Ireland ‘Centre of Excellence’ and located next to Newcastle Graveyard, has been in Con’s possession for around a decade.

As reported in The Echo, Con McCarthy submitted a joint proposal to South Dublin County Council for the rezoning of the land in question, with the potential to develop 250 houses.

In that proposal, it was outlined that a minimum of 3.2 hectares of the 26-acre site and “significant funding” would be provided for leisure and recreational facilities for St Finian’s GAA Club and members of the community.

But the club was met with massive disappointment after a motion to rezone the lands from agricultural to residential use was voted against by the majority of local councillors at a County Development Plan Meeting in June.

St Finian’s previously stated that Newcastle is “starved of recreational facilities” and calls were made by councillors for the local authority to provide appropriate facilities and amenities.

“Regrettably the bigger plans didn’t get the support it needed, but hopefully in a few years time we can have a look at it again and see how it goes,” Con concluded.

Despite the joint motion not getting the thumbs-up from councillors and with hopes of revisiting the plans in the future, Con McCarthy is still going to develop the lands for the use of the GAA Club in the interim.