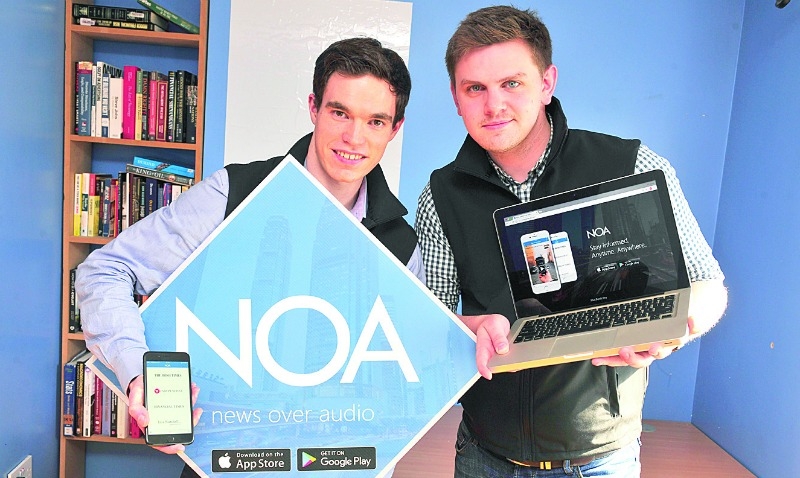 News Over Audio wants to become global home of audio-journalism

THE world of digital media is changing at a ferocious pace, but one former ex-Echo paperboy is leading a new and interesting wave of news providers.

Gareth Hickey (25), from Tallaght, is co-founder of News Over Audio (NOA), an audio news streaming platform built to deliver high-quality journalism from the world’s best publishers.

The App was created by Gareth and his co-founders Shane Ennis and Philomena McGinley, to address global disengagement between publishers/advertisers and the public.

NOA is designed so that users can listen to journalism “on the go”, with articles read to them by a team of professional broadcasters anytime, anywhere and on-demand.

It has been a tough time for the journalism industry, but platforms such as audio from respected sources, is one Gareth feels could entice in both traditional and younger people.

NOA launched on May 2 with the Financial Times, the Independent (UK), and the Irish Times already on board.

The Old Bawn-based start-up is in discussions with publishers from the UK and USA to sign up more big names, and Bloomberg are set to join in June.

“The response [from publishers] has been very strong,” said Gareth.

“Publishers want to have audio, some already do with podcasts, which are timely and essentially radio. There will definitely be a big push in the next five to 10 years to step away from the more linear programming to more audio on-demand.”

The format is similar to that of television, with sites such as Netflix and YouTube offering people content that they want, when they want it, and easily accessible.

“It’s an all-you-can-eat if you sign up to a full subscription,” said Gareth.

“At the moment, it’s a very loose paywall. What The Irish Times has and what we have on the App are independent and not related. It’s a case of us building up our user base and metrics.”

NOA plan to record between 7-10 articles (per publisher) per evening/night for distribution over audio from early morning the following day.

Whilst it is early days for the company, which is currently based in Gareth’s family home, himself and Ennis have spent the last two years working on the App, meeting advertisers/publishers and uploading articles.

A former analyst with US securities and derivatives firm SIG, Gareth studied finance and economics in Maynooth, but says it was his role as a paperboy that gave him his first appreciation of quality journalism.

Gareth continued: “The Echo was my first exposure to news. My mother took care of the Aylesbury distribution for 16 years, and I always remember reading through the paper before I went out.”

He says problems facing the publishing industry became the focal point for the establishment of NOA in 2015, as he sought to develop a new way for younger people to engage in journalism.

Another potential game-changer, according to Gareth, is advertising formats on the NOA App.

“Advertising space on the App is revolutionary in a sense – banner ads corrupt the experience, and research shows ‘user blindness’ in that they are so used to not taking the ad in,” he said.

“We feel like our App doesn’t interfere with the experience, and we can track how long ads are visible on screen.”

Delivering his local paper through the door gave him a taste of journalism, now Gareth wants NOA to become the gobal home of audio-journalism.

NOA is available to download on the Apple App Store or on Google Play.