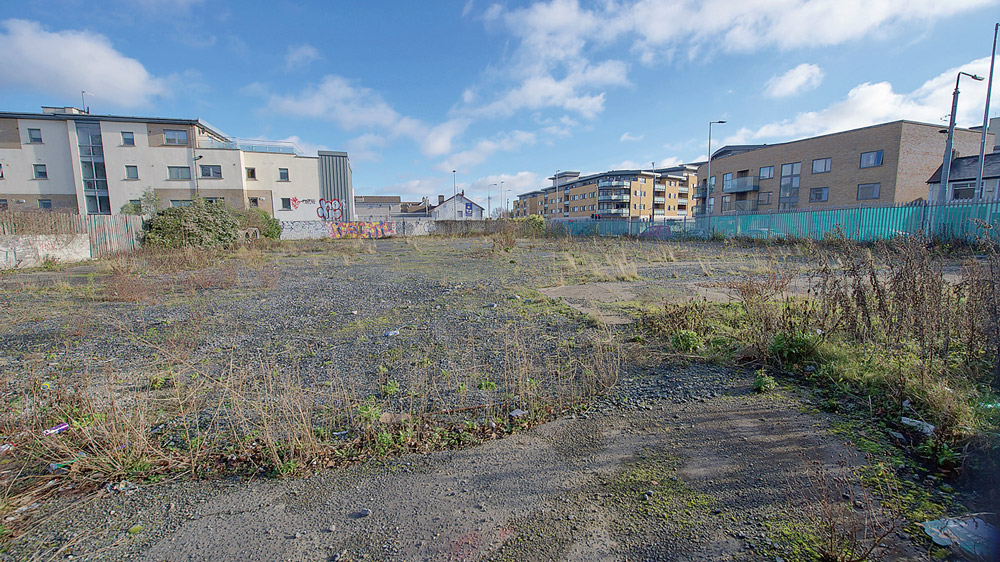 The former Esso site in Tallaght village, now a wilderness

No plans for derelict Esso site

SOUTH Dublin County Council has “no plans” to acquire the derelict former Esso site in Tallaght village, which a local councillor described as being “disappointing”.

The topic of the derelict former petrol station site has been raised many times over the years, with Independent Cllr Mick Duff saying back in 2019 that it leaves “a bad impression” on the area.

Cllr Mahon tabled a motion describing the site as “strategically important” and “one which should be in public ownership and control”.

The motion, which was agreed by the Tallaght councillors at the meeting, called on council management to further investigate purchasing the site and bringing it into public ownership.

In response, the council noted that the site had previously been suggested as a site for the proposed County Heritage Centre and said: “The council at present have no plans to acquire the site and have no provision in the current three-year capital programme.”

Cllr Mahon told The Echo that he found that council’s response “disappointing” and that a greater effort should be made to acquire the site which has lain idle for many years.

He said: “We expect the council to look at it in its upcoming review of land ownership and economic development, but it is disappointing that they have not taken a more strategic turn to the site already, as this is not a new issue.

“It is disappointing to learn that no steps have been taken internally or behind the scenes regarding the site.”

Cllr Mahon raised several points in the meeting encouraging support for the motion, including his view that “as councillors we should regard this as an important piece of land and an important strategic piece of land re the future of Tallaght Village.

“In the discussion regarding the Heritage Centre the purchase of the site did not appear to be excessively costly for the council.

“The village has seen huge development in terms of apartments with little or no consideration to new recreational amenities in the village centre.

“With the Priory and the IT lands essentially behind closed gates, huge tracts of land that could be enjoyed by the public are generally off limits to most people.

“The site has been an ongoing issue in Tallaght village for close on 20 years and local people would like to see proactive steps taken by the council.

“The site is starting to rewild,

giving some indication as to how it could be used.

“Councillors need to drive the process and push for the council to take a proactive approach to the site, and local groups and individuals should contact the council or councillors and make their support for public ownership known to them.”

The last time there was a plan for the site to be in use was in 2020, when plans were submitted for a 43-unit apartment development, consisting of two apartment blocks and to be called Friar’s Place.

However, the planning application proved to be very contentious, attracting 26 objections and being refused planning permission by the council as they stated that the

scheme would cause “significant visual harm”.