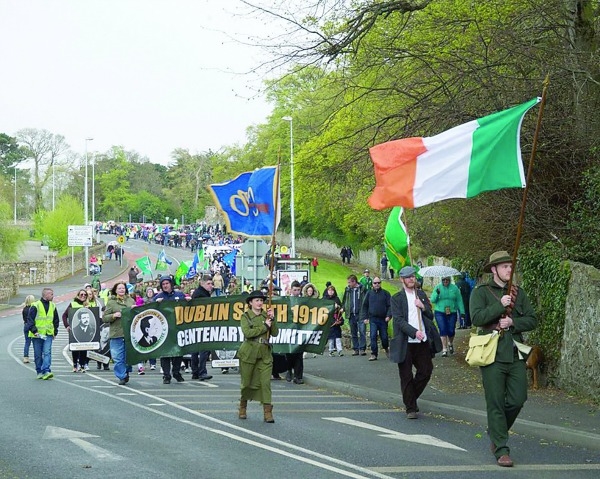 Over 1,000 proudly marched from Ballinteer car-park to St Enda’s Park in remembrance

The family-friendly, non-political party, community event was held in conjunction with DLR County Council and facilitated by the Office of Public Works.

This was followed by the laying of wreaths at the bust of Pearse’s head by Linda Devereux, a relative of Patrick Doyle, who was killed in Clanwilliam House in the Battle of Mount Street Bridge on Easter Week, committee member Kareem Muhssin on behalf of the Dublin South 1916 Centenary Committee, and Seán McLoughlin, relative of Elizabeth ‘Nurse’ O’Farrell.

Niall Oman took on the role of lowering the flag. In the meantime a minute’s silence was held in memory of all the men and women who took on the might of the British Empire, Easter Week, 1916.

The piper then played Amhrán na bhFiann, at this point the crowd had joined in to conclude what was a hugely successful community event.

NEWER POSTMallin family home to be open to the public during the month of May
OLDER POSTWith almost 1,000 nurses, Tallaght Hospital sees it as the right time to recognise their dedication