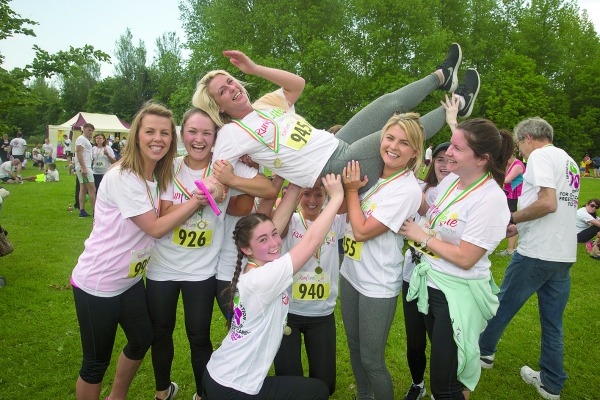 OVER 500 hundred people turned for the Irish Kidney Association’s ‘Run for a Life’ fundraiser event in Corkagh Park, on Saturday.

Several participants took part with family and friends to honour their organ donors, while others, including some who are awaiting transplants, took part to help raise awareness about the vital importance of organ donation.

Among those taking part was ambassador for Organ Donor Awareness 2016, RTÉ’s Vivienne Traynor, along with her extended family, to support their relative Michaela Delany, (age 16) from Clondalkin.

Michaela is waiting for a second kidney transplant, having undergone her first when she was just two years old. She will be sitting her Junior Cert exams in June, and was joined by parents Dermot (Vivienne’s first cousin) and Liz Delany, who have taken part in the fun-run event for the past eight years.

Moved by Michaela’s plight, a large group of Dermot’s friends in Tallaght Athletics Club ran in the event.

Also running was Vivienne’s nephew Martin Traynor, whom she donated a kidney to prior to him undergoing another transplant a few years later from a deceased donor.

Walking in the event for the second year in a row was Janice Moran (27) from Drimnagh, who was diagnosed with kidney failure 16 months ago and has been undergoing ten hours of nightly dialysis treatment since.

IKA’s Run for a Life Race Organiser, Colin White said: “The key to the success of organ donation for transplantation is to ensure that people discuss their wishes with their families.

“The event could not happen without the support of the sponsor, Astellas Pharma, and all of our wonderful volunteers.”

For organ donor cards, freetext DONOR to 50050 or visit www.ika.ie/card

It is also possible to download an organ donor card on smartphones by searching for ‘Donor ECard’ at the iPhone store of Google Play Store. Your wishes to be an organ donor can also be included on the new format driving licence which is represented by Code 115.