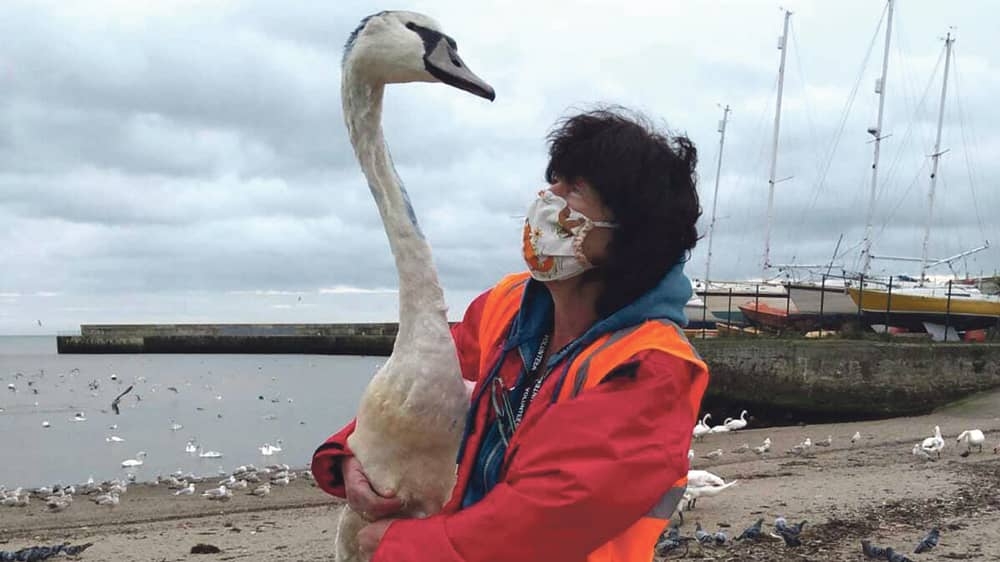 ‘People are genuinely concerned for the wildlife in their area’

A TALLAGHT resident is a volunteer responder with Ireland’s first Wildlife Rehabilitation and Teaching Hospital, which is dedicated to helping sick, injured and orphaned animals.

The emergency hospital opened in February on the grounds of a shuttered pub in Meath, which is being used as a temporary, interim site – where Irish wildlife from bats to badgers, fox cubs to swans will be cared for.

Lisa McAuley is a volunteer at Ireland’s first Wildlife Rehabilitation and Teaching Hospital. Lisa is holding a swan that was rehabilitated being released in Bray harbour

Stables to the rear of the pub have been converted to accommodate animals and birds, with a portacabin transformed into an intensive care unit.

The emergency hospital has been developed by Wildlife Rehabilitation Ireland (WRI), a not-for-profit NGO that represents wildlife rehabilitators and the welfare and conservation of wildlife in Ireland.

Campaigning for a wildlife hospital for a number of years, WRI has created the emergency, interim hospital due to a ‘significant increase in awareness’ of wildlife, with demand for wildlife rehabilitation increasing during the pandemic.

It is hoped that a permanent facility, which alongside caring for wildlife will promote awareness and education, can be secured with ongoing public support.

Lisa Mc Auley from Tallaght is one of around 50 volunteer responders across the country.

Two fox cubs that got trapped in separate gardens

When Lisa spoke with The Echo from her Old Bawn home on Tuesday, she was caring for 22 fostered animals – including pigeons, doves and hedgehogs.

A Tallaght Litter Mug member, Lisa has been watching out for the swans in parks across South Dublin County for a number of years before volunteering in 2015 with the Kildare Animal Foundation Wildlife Unit.

Many of the volunteers with the Wildlife Unit in Kildare actively took part in setting up the new Wildlife Hospital.

“I started cleaning out cages and feeding the animals before becoming a rescue volunteer,” Lisa said.

“I think one of my first rescue jobs was to collect a pigeon.

“Being a volunteer also involves training, and you receive qualifications for the foster care of wildlife.”

Lisa’s husband built two small units into the family’s back garden shed for any local, injured wildlife that needed a warm, safe place to heal.

However, Lisa will now be able to bring animals that require care or rehabilitation to the dedicated unit in Meath – which is also open at night.

“The emergency hospital is 24/7, and there’s live-in volunteers,” Lisa said.

“If anyone sees an animal in trouble, they can call the hospital’s helpline.

“People are very, very good…and that’s why I love what I do.

“People are genuinely concerned for the wildlife in their area, and when someone is so worried about a little pidgeon that they go to the bother of ringing us, that’s just amazing.

“They’ve given that animal a second chance.”

Lisa said she has responded to calls where swans are tangled in fishing tackle, or plastic is caught around a duck’s beak, and they cannot feed – highlighting the risk posed by litter.

The focus for volunteers is to rescue or rehabilitate, and then return, any animal in care back into the area they were found.

“We try not to interfere with wildlife but if an animal is in danger or injured, we will help,” Lisa said.

“I’d encourage anybody who sees injured or at-risk wildlife to call our helpline.

“You may get an answer machine when you ring, we’re very busy, but leave a message and a helpline operator will call you back.”