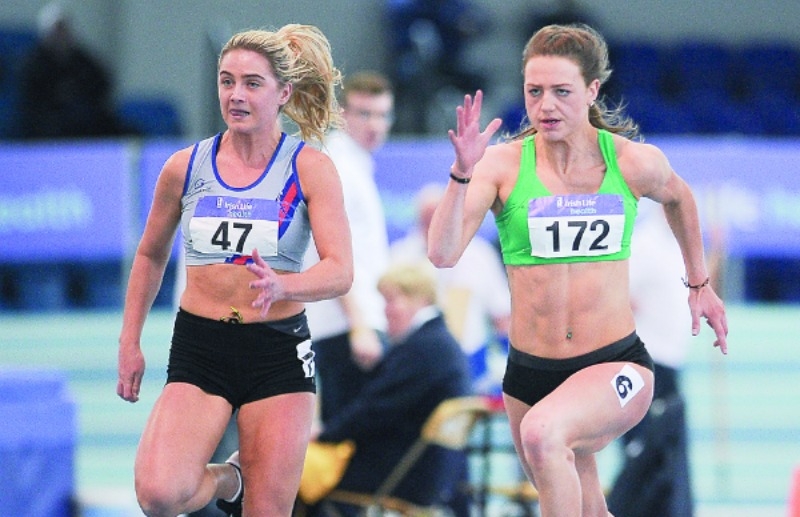 Podium placings for locals in National Junior and Under 23s

THERE was some success for local athletes at the Irish Life Health National Junior and Under 23 Indoor Championships in Athlone on Sunday.

In a thrilling finish, Tallaght Athletic Club’s Eoin Doherty clocked 6.94 seconds and, with it, second place in the Under 23 Men’s 60m sprint, a fraction of second behind Christian Robinson to won out in 6.92.

Sean Thompson of Lucan Harriers finished up third in the Junior Men’s Triple Jump behind Brendan Lynch of Loughrea and winner Jordan Haong of Tullamore Harriers.

A time of 9.28 seconds was good enough to see DSD’s Kate Doherty finish runner-up in the Women’s Under 23 60m Hurdles with Donore Harriers’ Aoife Lynch doing likewise in the Junior Women’s 200m before her clubmate Paul McDermott took third in the Junior Men’s equivalent with a time of 22 seconds flat.

Tallaght AC made its presence felt in the Junior Men’s 400m contest with their own Fionn Carroll and Simon Essuman finishing third and fourth respectively.

DSD’s Katie Berney finished up in fourth position in the Under 23 Women’s 60m with Rathfarnham’s Isabel Mullarney taking sixth in the Junior Women’s Shot Putt thanks to her best effort that measured 9.32m.

In the junior Men’s 1500m Final DSD pair James Maguire and Paul O’Donnell came home in fourth and fifth respectively while in the Men’s Under 23 equivalent, Rathfarnham’s Lee Byrne finsihed up in seventh.

Ailbhe Healy of Donore Harriers emerged fifth from the Junior Women’s Pole Vault contest before Tallaght’s Sarah Reihill earned fifth place in the Under 23 Women’s 800m with a time of 2:23.04 and Joe Halwax followed suit in the Under 23 Men’s 60m Hurdles.