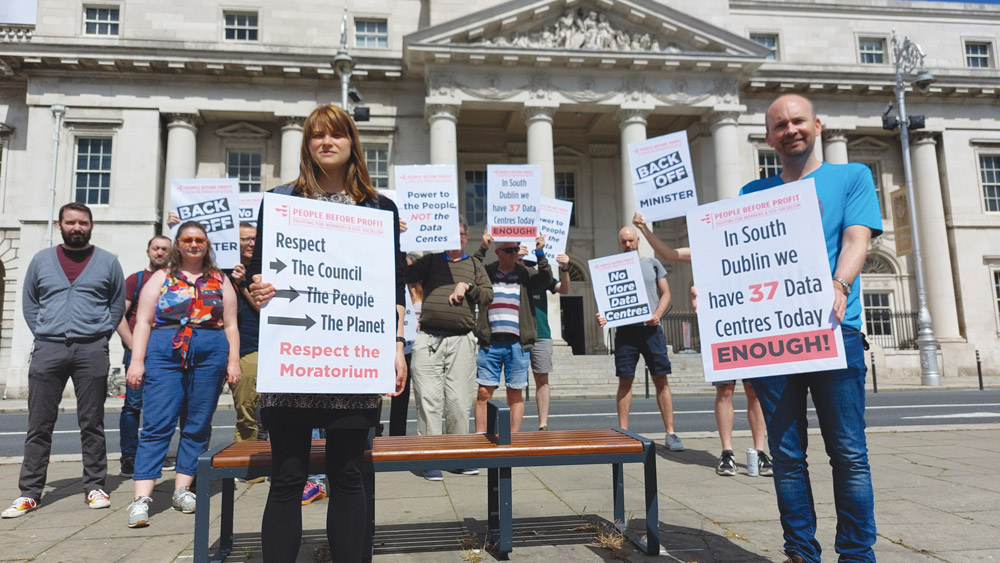 Cllr Liam Sinclair, Cllr Madeleine Johansson and Paul Murphy,TD, protesting with campaigners outside the office of the Minister of State with responsibility for Local Government

TWO local politicians led a protest outside the office of the Minister of State with responsibility for Local Government, Peter Burke TD, at Custom House Quay last Thursday.

Led by People Before Profit politicians Cllr Madeleine Johansson and Paul Murphy, TD, the protest allowed attendees to voice their frustration at instructions from the Government to overturn a moratorium on data centres in South Dublin County that had been approved by councillors.

This decision was reached by councillors after the issue was discussed in council meetings, and concerns about the impact of data centres on the national electricity grid and water supplies were voiced.

However, the chief executive of the council recommended the removal of the moratorium for the final version of the plan, which was then voted on again last June and the moratorium was reinstated.

Two weeks ago, the council received instructions from the Government overruling the moratorium on data centres and advised it be omitted from the County Development Plan.

The Department of Local Government directed that the moratorium be removed as it was inconsistent with a Regional Spatial and Economic Strategy (RSES).

The RSES “promotes Ireland as a sustainable international destination for ICT infrastructures such as data centres and associated economic activities at appropriate locations.”

Cllr Johansson and Deputy Murphy led a protest outside Minister Burke’s office last Thursday, to voice their opposition to the Government’s directive.

Cllr Johansson, who tabled the motion for the moratorium on data centres, previously said: “I am absolutely outraged by the decision of the Minister to overturn the moratorium which was agreed by councillors.

“This is an attack on local democracy and makes a mockery out of local decision-making.

“The arguments put forward by the Office of the Planning Regulator against the amendment were very weak, and centred around the fact that there is no national policy to ban data centres.

“In my motion I made strong arguments, backed up by facts, about Ireland’s inability to meet our Climate Action targets if we continue to permit more data centres.

“I also made reference to a number of objectives in national policy which would back a moratorium on data centres.

“I believe that there is a contradiction in national policy between our commitment to reducing carbon emissions and allowing more data centres.”

NEWER POSTDeveloper wins planning for 266 homes in Saggart despite objection from the Department of Defence
OLDER POSTOver €60,000 extra funding for library projects is announced