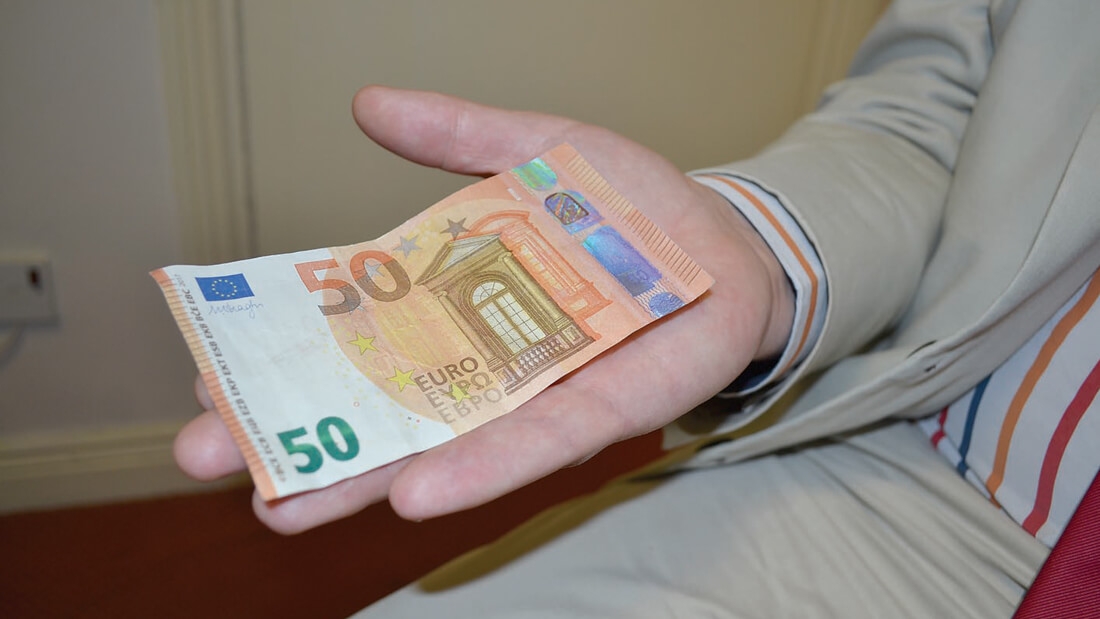 A BATCH of counterfeit €50 notes is being circulated around Tallaght, with more than 40 dodgy notes, believed to be coming from the same source, reported to gardai in recent weeks.

Gardai have this week urged local businesses and members of the public to be vigilant when accepting fifties, and to take the time to check the note for features that could identify it as a possible dud.

Sergeant Mark Redmond with one of the counterfeit €50 notes

In a number of reported incidents, according to Sgt Redmond, the counterfeit €50s are being used to buy small, cheap items off the menu.

“We believe that the notes are coming from the same source,” Sgt Redmond said.

“There are similarities between all of the €50 notes that we have received recently and the serial numbers are running in the same sequence.

“We do get counterfeit notes in, but there are more lately, and these ones are of a better quality.”

According to Sgt Redmond, the counterfeit notes have the short raised lines on the left and right edges of a legit banknote – which forgeries normally do not possess.

The forged €50s also have a watermark and a hologram (with portrait window), but on close inspection it is clear that these are not accurate.

The black line (security thread) that runs down the centre of the note is present but not as distinct as on a real €50.

However, the current batch of fake notes do not have colour-shifting ink on the ‘50’ symbol on the front, left-hand bottom corner, which is present on real notes.

The colour should change from emerald green to deep blue when the note is tilted, and this does not happen on the current batch of fake fifties.

“There are features [on the counterfeit €50 notes] that will identify it as a counterfeit but people need to look at it closely,” Sgt Redmond said.

“The feel is not perfect but it’s not bad . . . people need to look at the note closely.”

He added: “We are alerting businesses, especially takeaway restaurants, to check all notes.

“At the moment, we have only been alerted to €50 counterfeit notes but we would encourage businesses and members of the public to check all notes.

“We have received around 40 of these counterfeit €50 notes in the space of two months in the Tallaght area and we have noticed a few in Rathfarnham.

“However, it could be happening further afield.

“Gardai are following a line of investigation and are aware that both males and females are handing these notes out.”

Sgt Redmond has also alerted businesses that use a counterfeit pen to make sure they also check features – as the very faint writing that appears on these fake fifties may not raise suspicions.

However, the notes do not have the UV feature for businesses using a UV note-checker machine.

“I will also be contacting South Dublin Chamber to ask them to spread this message through its network.

“Members of the public and businesses should be aware . . . and need to know what to look for.”

A list of what to check for on notes can be found at www.centralbank.ie.

Sgt Mark Redmond can be contacted at Tallaght Garda Station on 6666000.