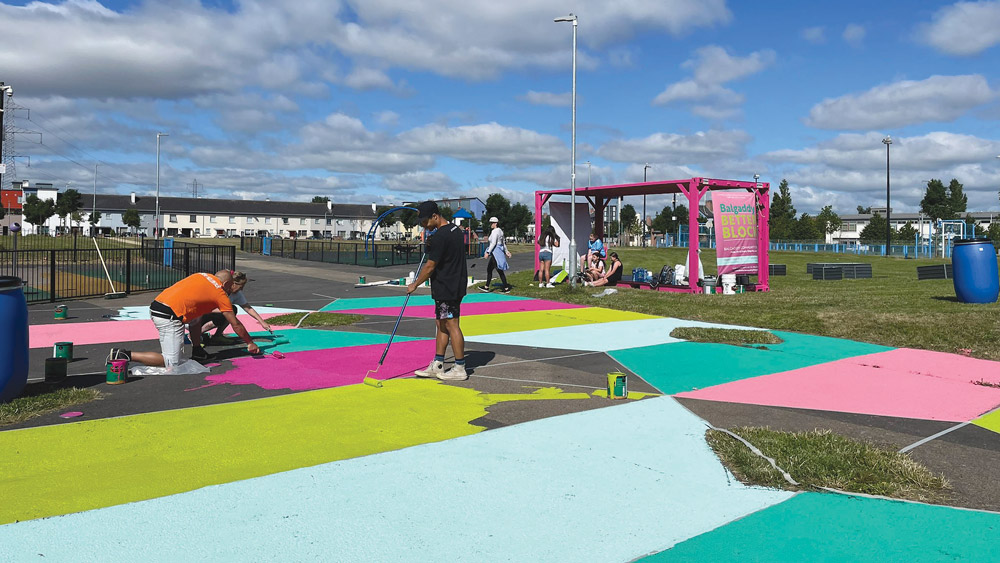 Working on the Better Block Project in Balgaddy

RESIDENTS in the deprived Balgaddy area have banded together and made a bid to “reclaim their community” through a placemaking transformation of a communal area in the estate.

Balgaddy has had storied issues with deprivation, with the 15-year-old estate boasting issues of a lack of amenities, poor-quality housing which were in breach of human rights, and anti-social issues.

A non-profit organisation called the Better Block Foundation educates, equips and empowers communities all around America to reshape and reactivate built environments to promote the growth of healthy vibrant neighbourhoods.

After great success stateside, the group embarked on their first international project and in association with Microsoft, Balgaddy was picked after engaging with South Dublin County Council.

Over two days, a much-vandalised playground and communal grassy area was transformed with local residents coming to the fore, painting and redesigning their community.

A colourful ground mural, pollinator garden and shipping container stage were erected on site while there was a big family fun day complete with food trucks and stalls which took place on July 15-16.

“The community has been able to transform their space into what it could be and there is the potential there to develop it further into what it should be,” Noreen Byrne from North Clondalkin Community Development Programme (NCCDP) tells The Echo.

“It is there for people to use, to enjoy it, because it is theirs and it could be so nice and so pleasant.

“The buzz across the two days was electric and the residents really enjoyed it. 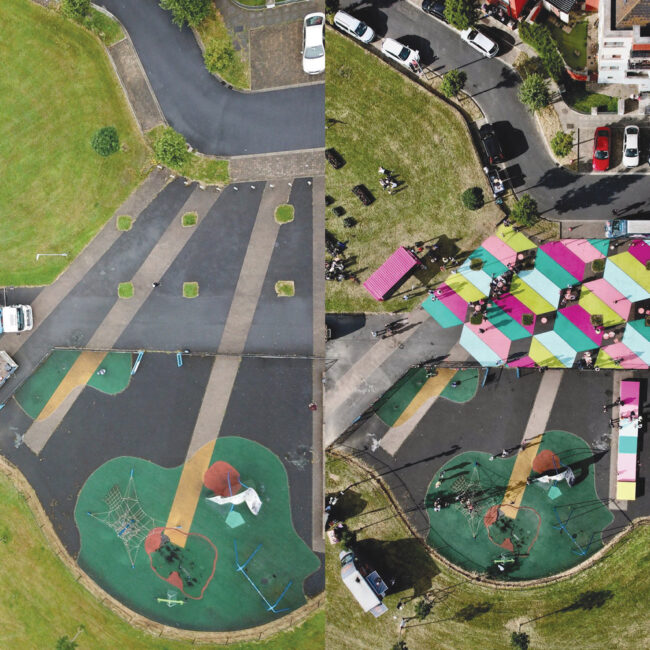 Before and after photos of the playground

“We had a few people saying they couldn’t believe they had a place to sit down with their kids in a safe place and that they didn’t have to get on a bus to have somewhere to sit down.

“It shows now that people don’t have to leave their community if the amenity is there, because for a long time Balgaddy has been abandoned and let down, like a lot of deprived and disadvantaged areas across the country.

“If there are feet on the street, the community is safer and this is just the beginning, there is a lot more work to be done and it is very

Residents undertook an independent study of the Balgaddy development which found poor quality materials used in the buildings and the presence of dampness and mould.

In recent times, according to Cllr Derren Ó Brádiagh, “money has been thrown hand over fist” at Balgaddy by SDCC “to keep up with repairs”.

Works have been undertaken by the council, according to Cllr Ó Brádaigh around improving the structural and aesthetic value of the housing stock with permeability issues improving with new pathways and utility boxes being replaced.

Issues around drug-dealing are allegedly prevalent in the area.

According to Cllr Shane Moynihan, there are places in the housing estate, which has around 400 units, where there is “click-and-collect” drug-dealing happening.

“There is open drug-dealing, that is no secret.

“Balgaddy has been a huge challenge for local authorities such as South Dublin County Council, North Clondalkin Community Development Programme, the Community Safety Forum, the Local Policing Forum, and An Garda Síochána.

“In fairness to them, Gardai from Lucan, Ronanstown and indeed the Clondalkin Garda Stations have given a lot more personal time to the lads there and applied a lot of time, resources, and patrols into the area.

“Massive credit has to be given to the Balgaddy Residents Association for driving this Better Block initiative in the area, they’ve led this campaign to take back their own community.

“These are good hard-working respectable people who are working incredibly hard to ensure that Balgaddy has a wider place in society and to be able to try remove that stigma and label that Balgaddy has earned over the past decade.

“It’s a beginning, the Better Block was one of the better days for Balgaddy.

“Hopefully this is a turning point and we continue to see the investment of resources going into the area, because I believe it will only prove to be a good investment.”

Investment from the local authority into the community is well underway with new developments outlined by South Dublin County Council at the recent July monthly meeting of the authority.

Tenders have been accepted by SDCC for the development of 69 new houses in Balgaddy, which is expected to commence in August.

Meanwhile, a community centre for Balgaddy is at the advanced planning stage in the council.

NEWER POSTFour derelict houses to be taken in hand legally by South Dublin County Council
OLDER POSTThe Bodhrán Buzz: The idea was to bring awareness of our native drum