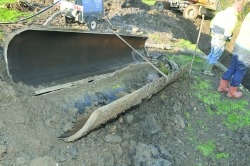 A total of 10 properties were damaged by gushing water from the pipe on November 4 but despite numerous attempts to have their sheds and garages fixed they have not been compensated by the company.

Tom Kearns, who lives in Ashwood Lawns, told The Echo that the studio in his back garden was totally destroyed by the flooding.
He said: “The place was just devastated out the back. The floor is destroyed and things that I have from my dad who has passed away are practically mulch. There is condensation and mould coming down the walls and a hideous smell – I reckon it will have to be gutted.”