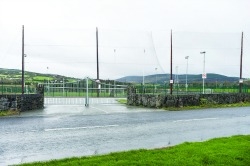 According to local reports, the car park of Thomas Davis’s all-weather pitch on the Kiltipper Road was crammed at around 5pm on Sunday evening – when a crowd of spectators gathered to watch a bare-knuckle fight between two members of the Travelling community.

The staged fight was witnessed by a number of shocked people travelling along the Kiltipper Road, with any residents who stopped for a look told to “move on”.
The incident is the second reported bare-knuckle fight on the Kiltipper Road in the last year, with the Director of Public Prosecutions currently preparing a book of evidence against two men from Tallaght in relation to an alleged bare-knuckle fight in Marlfield Crescent on February 22, 2014.
In response to a number of calls from the public, Gardai from Tallaght did attend the scene on Sunday and confirmed to The Echo that on arrival a large crowd was present.