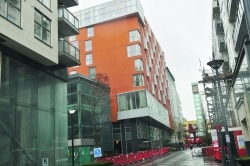 The empty Tallaght Cross Hotel has been identified as possible accommodation for homeless families, a proposal which could cost the Department of Housing in the region of €5 million.
NAMA has identified a number of unoccupied buildings on its books which could, with

modification, be suitable as temporary accommodation for homeless families.
The move is separate to the pre-Christmas push to get all rough sleepers off Dublin’s streets, with the Tallaght Cross Hotel being considered solely for families.
The Echo understands that in order for the hotel to be suitably modified it could cost the Department of Housing around €1 million – and that’s after the department buys the hotel off Nama, which is currently on the market for an estimated €3.5 million.