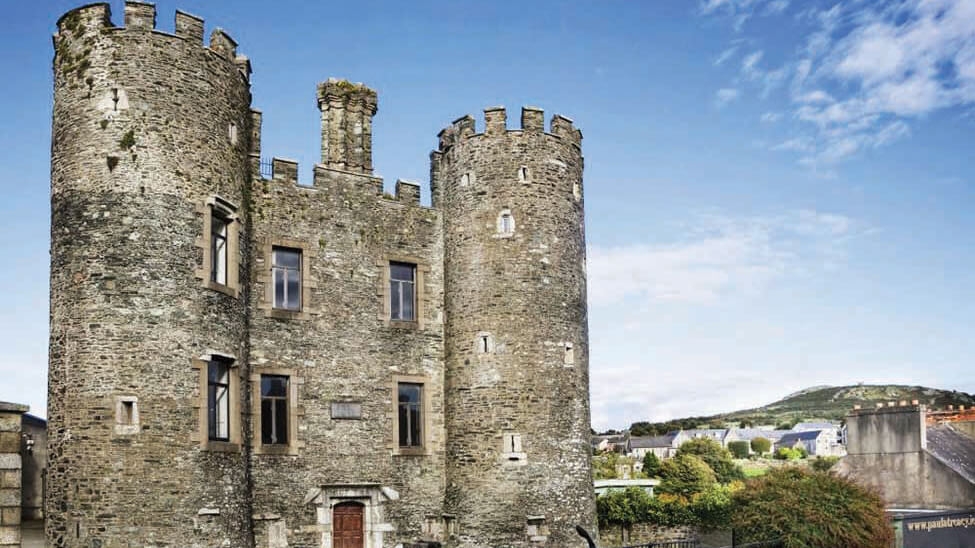 This week we are walking out of Johnstown Castle Estate (also known as the “Irish Agricultural Museum”), and here we will hop on a 40 bus back to Wexford Town and alight outside the train station.

We have a choice to hop on the Bus Éireann No. 2 route or, as I prefer to do, take the train to Enniscorthy from here.

Upon leaving Enniscorthy Station we shall walk for eight minutes in total via the bridge in the middle of the town to today’s destination – Enniscorthy Castle.

Just like last week’s subject matter, the castle owes its inception to the decision of Diarmuid MacMorrough to invite the great Norman Lord Richard Fitz Gilbert de Clare – far more commonly known as “Strongbow” – over to Ireland to help him reclaim lands he had previously lost in battles against rival Irish chieftains.

When De Clare and his army landed on Bannow Bay (31km south-west of Wexford Town), one of the most senior and highly trusted people on board was Maurice de Prendergast.

He is said to have been born in Havorfordwest, a Welsh town 10 miles north of Pembroke Ferry Terminal.

He was instrumental in ensuring the takeover of Wexford Town in particular and in return for his loyal bravery, 21 years after he first set foot on Irish soil, De Prendergast was granted a large tract of land by Strongbow in what is now Enniscorthy; The great Norman had by now become king after his father-in-law (he had married MacMurrough’s daughter in a grand wedding in what is now Waterford City) passed away.

In turn some of that land was then sub-granted to another Norman – Robert de Quency. He died in battle shortly after he took possession and, as his daughter Maud was too young to inherit her father’s legacy, Raymond le Gros was entrusted to manage the land asset on her behalf.

It was he who masterminded the initial construction of a castle in the form of a basic timber “motte and bailey castle”.

In many respects they looked a lot like the Celtic settlements of crannogs, ring forts and wattles, as the buildings were made of wood and had thatched roofs on them.

Normally they would be built in an area with a high enough hill with the castle on the hill surrounded by a high timber fence.

Outside the entrance gate were steps that led back down to the summit where the communal dwellings were located and which would nearly always include a religious structure. These were also surrounded by a large fence.

As you could expect with houses made of timber with straw roofs that used fires for cooking and heating, destruction of these settlements due to fire damage was something the residents were well used to.

When Maud finally came of age with a sizable dowry to her name, it was one Philip De Prendergast who managed to win her favour. They were to marry with her husband now taking ownership of the castle and its lands.

As was the case with many other notable settlements in the south-east at that time, they were faced with near relentless attacks from the Gaelic Irish who despised these foreigners and their alien customs, language and mannerisms.

In 1281 he was fined a princely sum of 100 shillings for his failure to attend sessions of Parliament, which was seen as an important duty that noblemen disregarded at their peril.

In the 1370s the lands reverted back to proper Irish control after a serious raid by Art MacMurrough, a descendant of the man who invited these usurpers over to Ireland in the first place.

This legendary king knelt down before Richard II and promised his full loyalty and swore not to do anything that would threaten his control.

But in that time he was quietly building up his army and the minute Richard II passed away he launched attacks on Norman settlements and began to build a large area of control.

Around 1536 the castle and its environs were once again back in the hands of a nobleman who was loyal to the British crown, when

Lord Leonard Grey, who was Marquess of Dorset and Chief Justice in Ireland gained control of it.

His brother-in-law was the even more powerful Earl of Kildare, who was one of, if not the wealthiest men in Ireland at the time.

However relations obviously turned sour by 1569 as his relation, with the help of the Earl of Ormonde, ransacked Enniscorthy and burnt down the castle, with many people murdered in the process.

The castle took on an altogether new usage in 1798 when it was used as a prison where many captured Pikemen were sent.

The last family to live there were the Roches, who resided there from 1903 to 1951. They funded the purchase and upkeep of their new residence via the many businesses they owned in New Ross, as well as the considerable profit from the produce made at the large Malthouse in Enniscorthy that they also controlled.

Today the castle is a museum and well worth a visit if you are passing through Wexford town.