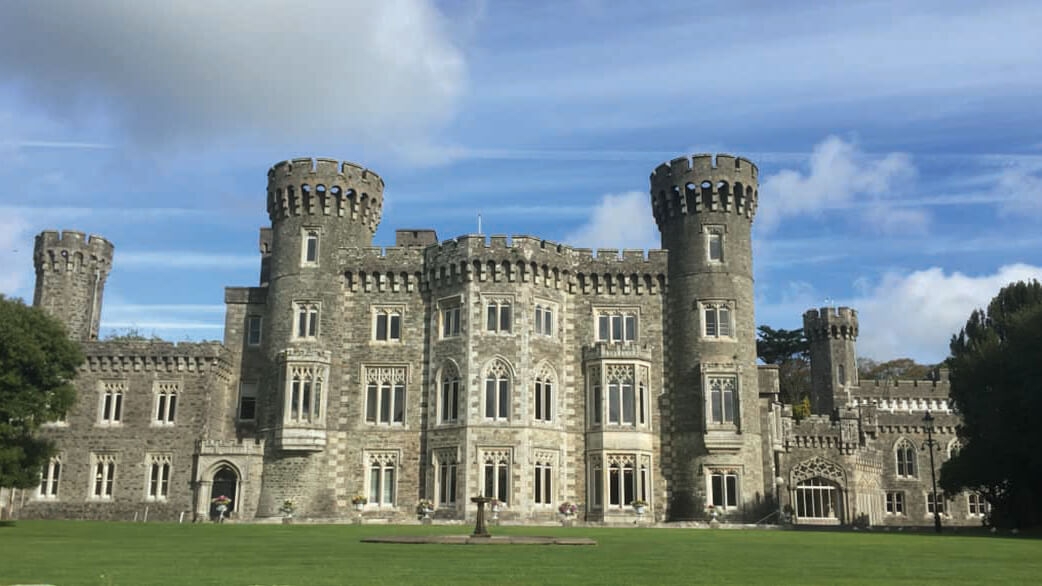 For today’s piece we are leaving the most haunted house in Ireland and heading up past Wellingtonbridge and Murrintown to one of the most impressive still-standing castles in the country – Johnstown Castle.

Having visited it myself I can say it is very much worth the 46km drive from the Hook Peninsula as the exhibits give a great insight as to how people lived and worked in the past.

Johnstown Castle has been the property of the state since 1946, when it was donated by Captain Larkin.

Like so many of similar dwellings dotted around the South East, the castle owes its origins to the invitation Diarmuid MacMurrough made to Strongbow to come over to Ireland to help him win back lands he had lost in battle.

In this case the people concerned were the Esmonde family and it is said they arrived on our shores from somewhere in what is now known as Lincolnshire.

They also built another notable house in the nearby townland of Rathlannan.

The first inception of the castle dwelling that stands before us now was first constructed sometime in the 15th century and would have had about four floors with the noble family living on the top floor, while the servants slept on the bottom rung.

This family were believers in the Catholic faith which would see them come to grief sometime in the 16th century after Oliver Cromwell came to Ireland and terrorised the population for siding with the now-deposed English king Charles I.

While folklore is strongly etched in many peoples’ memories regarding Old Ironsides in relation to his ordering of the brutal slaughter and burning of the town of Drogheda, other areas were also brutally dealt with as well, amongst them Clonmel and Wexford Town.

The annals of the event make note of the fact that the head of the English Parliament spent the night in Johnstown Castle prior to his attack on the county town by the sea.

It was also on these lands that he prepped and organised his troops on advance of the battle.

Oliver and his army arrived in Ireland on August 11, 1649 and by October he had reached the Model County with his massive deployment of around 16,000 troops.

Some of the men of note living in Wexford town said they should continue to proffer it’s support for the Duke of Ormonde, while others argued it would bet better for their futures if they essentially waved the white flag and acquiesced to whatever demands Cromwell placed on them in order to protect their lives and the town.

Sadly for the ordinary folk residing with the walls the besiegers eventually lost patience with the squabbling stakeholders inside the town and brutally murdered 2,000 people while burning the town to the ground, much like he did with Drogheda a few weeks beforehand.

When you read about this man’s deeds you can understand why some compare him on a scale equivalent to Adolf Hitler.

As was the case with most of the Catholic landowners back then, the Esmonde’s lost control of their lands and they eventually ended up in the hands of the Grogan family.

Hamilton-Knox-Grogan-Morgan was probably the most prominent of the family and he held the extraordinarily prestigious position of MP for Co Wexford.

I wonder what he would have made of his future descendant and owner of the castle Cornelius Grogan who was hanged in 1798 for his part in the insurrection against the British Crown.

A secret society had been set up known as the United Irishmen which had as its overarching goal the removal of British rule in Ireland.

The exponents of this group, amongst them the likes of Theobold Wolfe Tone and Roddy McCorley tapped into widespread anger over the rising cost of rents and foodstuffs, while farmers saw no increase in the prices they were being paid for their produce.

Father Murphy, a Catholic priest from Boolavogue (22km southeast of Gorey) became the de facto leader of the movement in the South East after he urged his parishioners to rebel against these rising costs. This quickly spread to many other parishes too.

Having routed the crown forces in Enniscorthy and taken over the town, dilly-dallying allowed the garrison of Wexford to flee with all their munitions before the rebels arrived there to also take control.

This would prove crucial later on in the battle.

Father Murphy and his insurgent followers had grabbed control of the vast bulk of Co Wexford and held onto it for three weeks before a huge number of British reinforcements arrived to do battle with them.

Sadly, the men and women, armed mostly with the basic pike, were no match for their heavily armoured foe who had thousands of rifles and numerous cannon in its arsenal.

And so it was that at showdowns at Vinegar Hill in Enniscorthy and New Ross the peasant army was routed and foreign control was once again maintained over Wexford.

In the 1830s a major renovation took place in Johnstown and the big imposing dwelling that greets you today on your arrival was built then.

Just 115 years later the then owner Maurice Victor Lakin, a descendant of the Grogans, decided the upkeep needed to enable someone to reside in as big a house as that and oversee over 1,000 acres of farming and wildlife, came as too much of a burden. He agreed a deal to hand it all over to the Irish state.

It is managed by the Irish Heritage Trust, an independent charity and owned by Teagasc which houses a brilliant Agricultural Museum which gives visitors a fantastic snapshot of a previous era.

So if you are visiting Wexford this summer, be sure to give Johnstown Castle a visit!