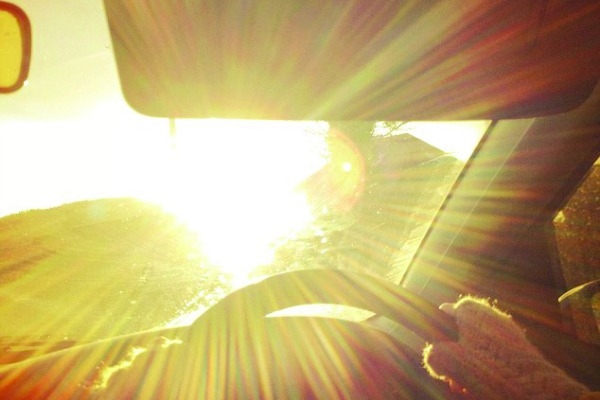 The Road Safety Authority (RSA) and An Garda Síochána are reminding drivers to be aware of the danger posed by ‘sun glare’, which results in drivers being temporarily dazzled or blinded by the intensity and brightness of a low sun on the horizon.

The appeal comes as provisional crash reports indicate that drivers being temporarily blinded by ‘sun glare’ may have been a contributory factor in five fatalities and nine serious injuries between 2014 and 2015.

Commenting on the issue Ms. Moyagh Murdock, CEO, RSA said “Because, at this time of the year, the sun sits so low in the sky, late in the morning and early evening, corresponding with the main commuting times, the sun visor on the car isn’t really much help at all.

If a driver is driving straight into such a sun he or she can be completely dazzled by the sheer intensity and brightness of its rays. The situation is made worse if the windscreen is dirty or greasy or if it’s been raining, or the ground is covered with snow. In this situation the glare reflects off the wet or snow covered road to further dazzle the driver.

Chief Superintendent Aidan Reid, Garda National Traffic Bureau, advises driver on what they should do, “Reducing your speed is the first and most obvious thing to do.

Slowing down on the approach to junctions, corners and bends is critical. You simply do not know what hazard may be up ahead at these potential risk spots, and one you certainly won’t be anticipating is being blinded by sun glare. In particular, watch out for vulnerable road users, namely pedestrians, cyclists and motorcyclists. ”

“Ensure your windscreen is clean inside and out. Add windshield washer fluid to the water in the reservoir and check that the wipers are not worn away or damaged. Replace them if they are. Consider wearing a pair of polarised sun glasses. They will help greatly if driving into a sun that’s low on the horizon.” He added.

Concluding Ms Murdock said, “If you are heading East in the morning, the direction the sun rises or heading West in the late afternoon, where it sets, please be conscious of sun glare.

“By simply being aware of this problem, which we all need to take more seriously, we will be able to read the environment and conditions and make better decisions when we are driving. Importantly we won’t get caught out or blinded by the sun when turning the next corner.”