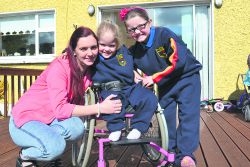 SEPTEMBER is not always the most celebrated time of the year for many young school-goers.

However, for four-year-old Ava Cahill from Old Bawn, this September signals the start of an exciting opportunity – one which her parents weren’t always confident would become a reality.

Ava has Spina Bifida and a condition known as hydrocephalus, fluid on the brain, and since birth has had no feeling in both of her legs from the knee down – resulting in Ava being totally dependent on a wheelchair for independence.
Ava’s mam Suzanne told The Echo: “Ava has been going to pre-school in Scoil Mochua, a special school in Clondalkin.
“Ava has a physical disability, but not an intellectual one, and we always hoped that she could go to mainstream school.
“We have had to fight for a lot of things for Ava over the years and even though we were trying to stay positive about her going to mainstream school, we were building ourselves up for a challenge.”
She added: “However, Ava has been enrolled in Scoil Maelruain Junior in Old Bawn and the school is making an application for funding to the Department of Education for minor enhancement, such as a ramp and an easy access toilet, which will make moving around the school easy for Ava.
“Ava learns like everybody else and it’s very positive to see that schools and the Department of Education are supporting all children, regardless of any disability, to go to mainstream school.
“This is such a positive thing for both kids with disabilities and school communities as a whole.
“It promotes diversity and acceptance from a young age and gives every child an equal opportunity to learn.
“Ava is excited about September – a little apprehensive about leaving her friends in Scoil Mochua, but excited about making new ones.
“She’ll also be in school with her big sister Erin.”