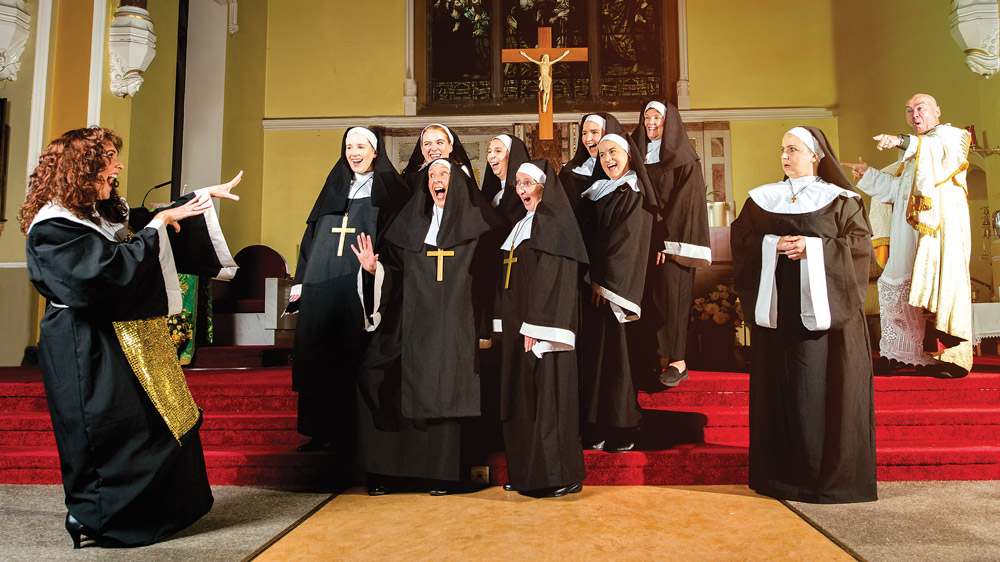 The cast of Sister Act

A cast of talented local performers will be donning nuns’ habits for a lively rendition of ‘Sister Act’ on the Civic Theatre stage next month.

Rehearsals for the show are in full swing, with the members of the Harold’s Cross Tallaght Musical Society meeting up three times a week to finesse their performances.

Much like the film, the show centres on a lounge singer called Deloris who has to go into witness protection – and tries to adjust to her new identity as a nun in a convent, with hilarious results.

Tallaght woman Charlene Masterson, who is a member of the Harold’s Cross Tallaght Musical Society and will play Sister Mary Patrick, told The Echo about what the audience can expect.

Why did the Harold’s Cross Tallaght Musical Society (HXT) decide to pick ‘Sister Act’ as the piece they would perform in the Civic next month?

‘Sister Act’ has been on our shortlist of shows for a number of years now. We haven’t been on stage since November 2019, so we knew we had to come back with a bang, and ‘Sister Act’ just fits the bill.

How many members are in the musical society and what do you personally enjoy most about being a member of it?

We have over 50 members in the society, many of whom have been with the society from the beginning.

This year we have about 35 members taking to the stage in this production. I most enjoy the people! HXT are my second family. It’s the place where I met my best friends and it just has a special place in my heart always, because of the very special people it has in it.

Can you tell me a bit about your character Mary Patrick and how you feel about portraying her on stage?

Mary Patrick is the definition of the ‘Energiser Bunny’ – constantly full of energy and laughter – much to the annoyance of the other sisters sometimes, I think.

She just thinks everything is fun and wonderful, and frankly she just loves being a nun! I am having the best time playing her on stage.

It’s busy being a nun, and being Mary Patrick is slightly busier as she’s in dialogue scenes as well as all the dance and singing numbers.

But the support of the entire cast for each other makes the blood, sweat and tears worth it.

How are the rehearsals going for the show?

Rehearsals are going well. As you can imagine, this show is very full-on for the nuns. We have been in rehearsals since just the end of August, three days a week.

There’s so many music and dance routines to learn, but it’s been just so much fun, and the feeling of love and sisterhood is just off the charts within the cast.

We only have a handful of men in this production, and they have been brilliant and will knock the roof off the Civic with their performances.

They’ve also been a huge support network for the girls which is just lovely.

What can the audience expect from the performance?

Even though the much-loved music from the movie doesn’t feature in the show, the storyline is the same.

The audience can expect fun, laughter, and absolutely hilarious antics from the convent.

There are really catchy songs that will have you wanting to dance in the aisles the whole way through.

Where can people go to hear more about the society’s work?

We will also have a new website going live really soon too at www.hxt.ie.

‘Sister Act’ is on in the Civic Theatre from every night from November 8 to 12 at 8pm, with tickets costing €23.

Tickets for the show can be bought by contacting the box office in the Civic Theatre on 01-4627477 or online HERE.