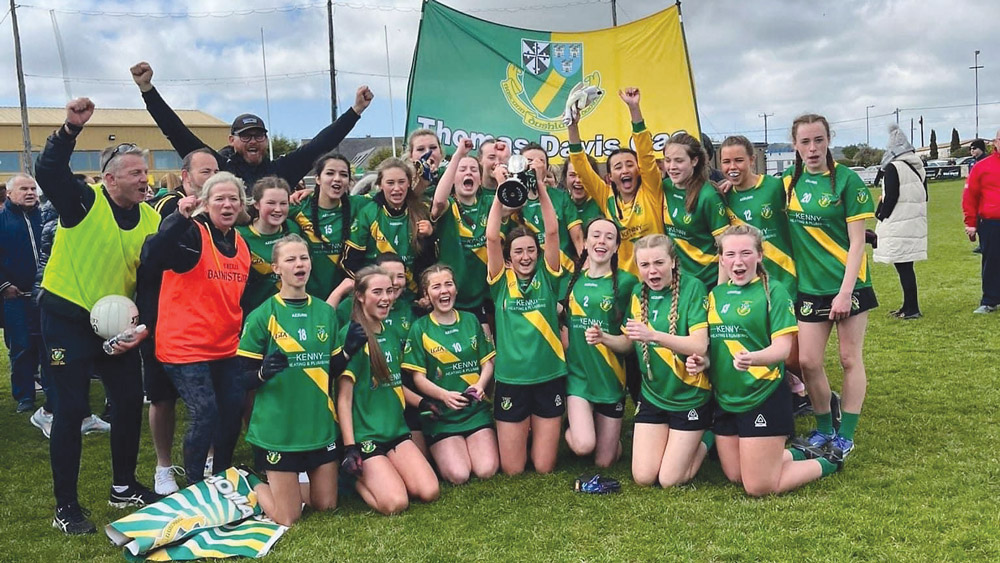 A GAME-WINNING save by goalkeeper, Stephanie Smith and points from Ciara McNally deep into extra-time saw Thomas Davis record a 3-6 to 3-4 win over Clontarf in the Dublin Division Two Ladies Football Féile Final on Sunday.

Hosted by St Anne’s in Bohernabreena, the decider was hotly contested as the two teams exchanged scores in the hunt to win the prestigious Under 15 competition.

It was Clontarf who raced into an early lead, striking 2-2 in rapid succession to put the Kiltipper girls on the backfoot.

However, goals from Cara Dalton and Morgane Berigan got the Little Village underway and it gave the side hope on their return after the break.

On the restart, Jessica Clinton Kenny kept the momentum going and kicked a brace of points to reduce the deficit.

And it seemed like Davis’ had the match sown up when Cara Dalton slotted the ball into the net, but Clontarf pegged one back to force extra time.

The Seasiders pushed hard for a goal but Davis’ netminder Stephanie Smith was equal to their advances, pulling off an excellent finger-tip save.

Having enjoyed a fine weekend throughout the group stages in which the team carded wins over Ballinteer St John’s, Clontarf and St Oliver Plunkett’s/Eoghan Ruadh and another in the semi-final against Raheny, Ciara McNally twice hit the target to seize victory for Thomas Davis.

Ciara Nugent and defenders Alex Giglione, Sophie Palmer and Grace Leigh were pivotal in seeing Davis over the line after a long weekend of competitive action.

Division Six hosts, St Anne’s slipped to defeat on their own turf against St Peregrine’s while St Mary’s were pipped by Stars of Erin on a scoreline of 2-5 to 3-3 in Division Seven.

Crokes made it a double, this time winning the Division Eight decider against St Finian’s while St Patrick’s Palmerstown and Thomas Davis B could not get over the line in the Division Nine and Division 11 finals respectively.

NEWER POST‘Templeogue has been my second home’
OLDER POSTMarch Team of the Month: Éanna Men’s Under 18 Basketball Team