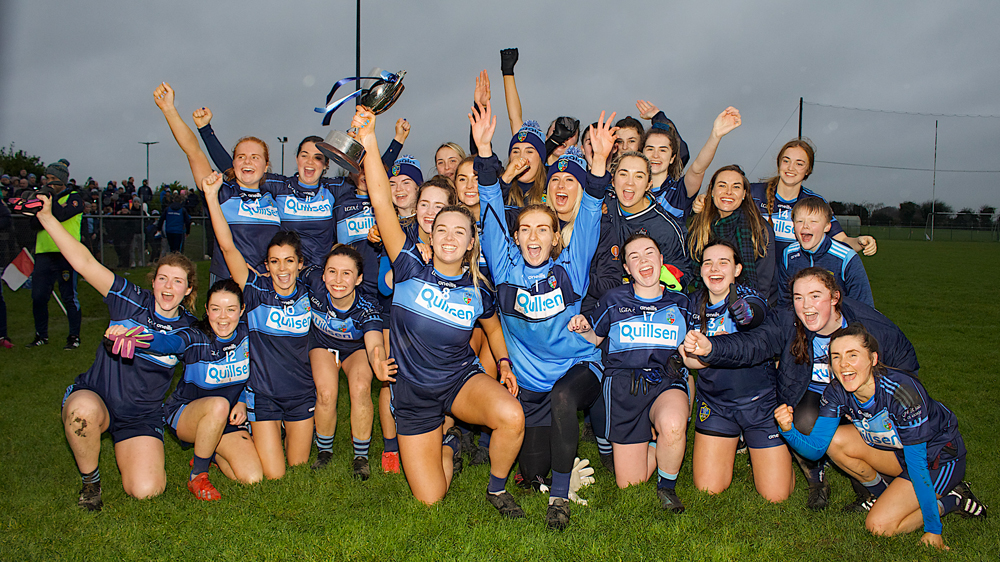 St Jude's celebrate their victory over St Colmcille's in the Leinster Junior Football Championship decider. Photo by We Are Dublin

STRENGTH-in-depth proved pivotal for St Jude’s as they made history in beating St Colmcille’s 2-12 to 2-8 to secure their maiden Leinster Junior Ladies Football Championship title in Kinnegad on Saturday.

In what was a memorable day for the club, competing in their first ever provincial decider, goals from Lisa Morris and Niamh Kerr were enough to see the Templeogue side to victory.

When mounting a comeback after the break, manager Jeff Kane unleashed the likes of Aoife Rockett and Roisin Connolly from the bench to help propel them over the line.

“When you look at how we lost the county final last year to now, it’s bizarre to see how far we’ve come.

“We have such a dedicated bunch of girls, it’s phenomenal to see the effort they put in.

“Not to sound cocky or anything like that, but I feel like we can safely say, hand on heart, that we deserved to win this.

“When it came to the county final this year, and every game since then, we’ve really just clicked towards the latter end of the season.

“You could feel that we were getting stronger and stronger after every game, doing the video analysis, training hard and gaining momentum as we went through each round.

“Once we beat Skryne in the Leinster semi-final, because we knew that was going to be a very tough game, there was absolutely no stopping us.

“We’ve made history in our own club. No adult team has ever even reached the Leinster, let alone win it.”

The Dublin champions made a strong start with Aisling Gannon, who was named Player of the Match, setting up Ellie Young to level proceedings following an early Megan Jobe point.

Young then turned provider, sending corner-forward Lisa Morris through on goal and she did not hesitate to guide the ball into the net.

Jobe was a livewire for the Longford champions and ended up finishing the game as top scorer with a personal tally of 0-6.

Jude’s found their range with Niamh Kerr nicking her second point and Cliodhna Nicoletti splitting the posts before Nessa Farley hit the net for the opposition, following an initial Aoife McAuliffe save.

Farley’s goal took Colmcille’s into the break with a 1-5 to 1-3 advantage and Jobe kept the scoreboard ticking over on the restart, trading points with Hannah Begley and Young.

However, St Jude’s began to take hold with players from all over the park getting on the scoresheet.

Young hit another brace of points and Kerr clipped her second of the match over the bar to push them ahead by two before a Michelle Farrell free for St Colmcille’s reduced the deficit to the minimum.

The final quarter was all St Jude’s as they begun to move the ball much more confidently from defence to attack and substitutes started to make an impact.

Rockett came into the fray and pushed the lead back out to two and Morris extended that advantage with another point for her side.

Farrell did pull a goal back for Colmecille’s, but it proved to be merely a consolation, with Jude’s running out four-point winners.

“I came on when we were a point up, I was lucky enough to kick a point, but it meant all the more to be on for the celebrations at the end,” Rockett explains.

“On a personal note, I had retired after we lost the county final last year.

“But I started doing a small bit with the second team this year and eventually found myself back in with the firsts.

“Somebody said to me after the Leinster final ‘and you were thinking about retiring’. I’m so happy that I decided to come back and got to be part of this with the club.”

St Jude’s will now go forward to contest an All-Ireland Preliminary Round, which will see winners of the four provinces and Europe and Britain compete for a place in the semi final.