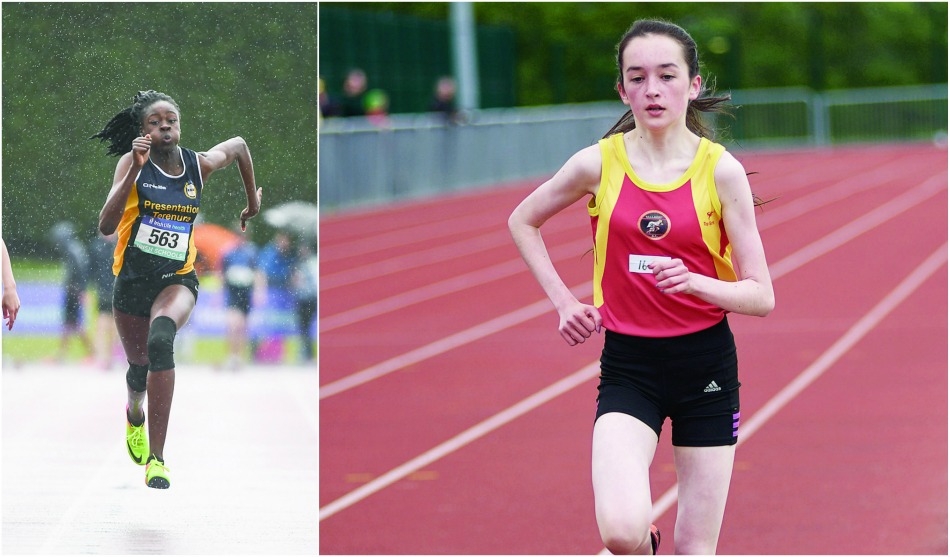 TALLAGHT athletes were again in top form at the Dublin Juvenile Track and Field Championships held in Santry, Tallaght and Irishtown last weekend.

Rhasidat Adeleke secured her fourth Championship sprint double this year when winning the Dublin Under 16 100m and 200m titles to add to her recent success in the All-Ireland Schools Championships in Tullamore when representing Presentation College Terenure.

After winning the junior 100m title in 12.30 and setting a new record time of 25.07 on her way to victory in the the 200m title at the Leinster Schools Championships in Santry a few weeks earlier, she again topped the podium in both events with times of 12.32 and 24.70.

This also added to her indoor double earlier in the year when she set new records for the 60m and 200m at the National Indoor Championships.

Jennifer McAdams was another who produced some very good perform-ances in the middle distance races when taking the Under 16 800m and 3000m titles.

She also won the Leinster Schools Under 16 Mile for Holy Family Community School, Rathcoole and was well in contention for the National title in Tullamore a few weeks ago.

Positioned well in a very tightly-packed field for the first few laps of the contest she was inadvertently clipped on the bend with less than 600m remaining and fell to the ground where she suffered scrapes and bruising to her knee and elbow.

By the time she bravely composed herself she was left trailing the field by over 20 metres, but with true grit and determination she battled on to take a well deserved bronze medal in 5.25.04.

Christopher Duffy was another in great form when he won the Under 18 400m title.

In the weeks preceding these championships he represented St MacDara’s Community College when winning silver in the Intermediate 400m at the All-Ireland Schools Championships with a very good time of 50.67 to add to the silver he won in the Leinster Schools where he clocked 51.13.

Eoghan Keaney won the Under 18 3000m to add to the silver he took earlier while he was also awarded the gold medal in the steeplechase.

These successes followed his recent bronze medal win at the Leinster Championships in the Senior 2000m Steeple chase with a time of 6.30.04 before stepping up a notch for Terenure College to secure the silver medal in the All-Ireland Final with a new personal best time of 6.26.87.

Moses Ikpefua was another who secured a double in the sprints when he won both the Under 15 100m and 200m titles.

In recent weeks when competing for HFCS Rathcoole he clocked 12.68 on his way to the Leinster Schools silver medal in the Minor Boys 100m before going even quicker with a 12.51 on his way to sixth in the All-Ireland Final.

Jack Kelly was another to top the podium for the club when winning the Under 13 600m title before taking bronze in the 80m sprint final while Gareth Hayes topped the podium in the Under 10 500m contest.

Lati Adeleke and Michael Ogunsiukan followed suit in the Under 19 Girls and Boys 100m deciders respectively before the former then also bagged the shot putt title with Jide Adiguns taking the boys equivalent.

Katelyn O’Neill Murphy won the Under 16 Discus and added silver in the shot putt while Aisling Mc Guinness finished runner-up in the Under 16 Javelin.

There was further joy for quite a number of the Tallaght juveniles after the results of the Dublin Under 10-16 Track and Field Leagues were announced.

Gareth Hayes took the Under 10 title while Khalad Kourrini finished third at Under 11 degree with Thomas Keating taking fourth.

Jack Kelly was third in Under 13 competition while Moses Ikpefua finished runner-up in the Under 15 boys league and Philip Omisore did likewise in the Under 16 division in which Yan Geraghty took fifth overall.

Tallaght girls were dominant in the Under 16 girls division with Rhasidat Adeleke taking the title and Lauryn McDermott second place with medals also going the way of Jennifer McAdams and Aisling McGuinness in fourth and fifth respectively.